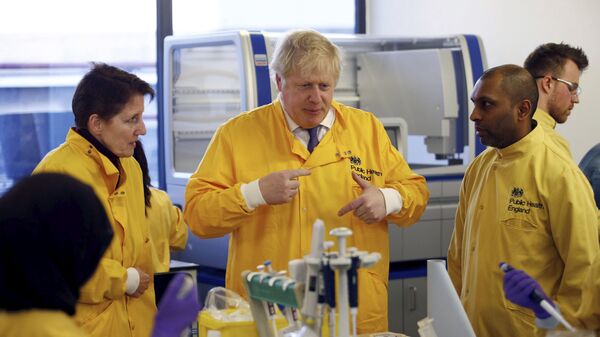 © AP Photo / Henry Nicholls
Subscribe
International
India
Africa
Ilya Tsukanov
All materialsWrite to the author
The UK has faced nearly 12,000 COVID-19 cases, including 580 deaths, with the Johnson government criticized from some corners over its alleged lackluster response during the initial outbreak period.

In a tweet, the PM wrote that he was self-isolating, but promised that he would "continue to lead the government's response via video-conference as we fight the virus."

Over the last 24 hours I have developed mild symptoms and tested positive for coronavirus.

I am now self-isolating, but I will continue to lead the government’s response via video-conference as we fight this virus.

Together we will beat this. #StayHomeSaveLives pic.twitter.com/9Te6aFP0Ri

"I've developed mild symptoms of the coronavirus, that is to say, a temperature and a persistent cough, and on the advice of the chief medical officer I've taken a test. That has come out positive," Johnson explained in a video accompanying his tweet.

Johnson praised the National Health Service, police, social care workers, teachers and others for an "amazing national effort" in responding to the COVID-19 pandemic, and thanked the 600,000 people who've volunteered to assist.

A spokesperson for the prime minister said Johnson has no plans at this point to delegate any of his duties to Foreign Affairs chief Dominic Raab, and that he will continue to work as necessary. The spokesperson added that Johnson will remain in self-isolation for a week.

Buckingham Palace announced later Friday that Queen Elizabeth II had last met with the prime minister on March 11, and that she has been taking "all the appropriate advice" regarding her own personal safety and welfare. Prince Charles tested positive for COVID-19 on Wednesday and went into isolation at his home in Scotland. Charles was said to have last seen the Queen on March 12.

Number 10 moved to shut schools, shops, and to introduce restrictions on people leaving their homes after ruling that previous government warnings did not lead to a sufficient reduction in "unnecessary social interaction." The Johnson government has received criticism over perceived delays in taking action to fight the outbreak, and its laissez-faire 'herd immunity' approach to the virus, which it has since corrected.

Johnson tapped Raab to carry out some of the duties of the prime minister in the event that he were to fall ill earlier this week. If Raab too becomes ill, Johnson may select any member of his cabinet to serve as acting prime minister.