Out of all the European Union states, Italy has been hit the hardest by the novel coronavirus, which has taken the lives of more than 8,000 people so far. And now the prime minister’s plea to other EU leaders to introduce some new financial instruments to provide help during the health crisis has gone unanswered.

Italian newspapers slammed European Union leaders for failing to agree on a joint economic response to the pandemic and to help Italy battle the financial consequences of the disease, with La Repubblica newspaper even referring to Europe as “ugly” in a headline for an article discussing the development. In a similar fashion, Corriere della Sera outlet that the “the European project” was “over” if EU leaders failed to agree on “swift actions” to address the crisis.

On 27 March, EU leaders met through a six-hour video conference to discuss economic recovery plans to address the offset created by the ongoing coronavirus pandemic. However, an appeal from nine countries, including Italy, for an introduction of some new financial instruments, such as “pooled borrowing” through so-called “coronabonds” to offset the economic consequences of the novel virus has been rejected by several EU states, including Germany and Austria. Instead, EU leaders argued that some other options would be negotiated and suggested by the ministers within the next two weeks. 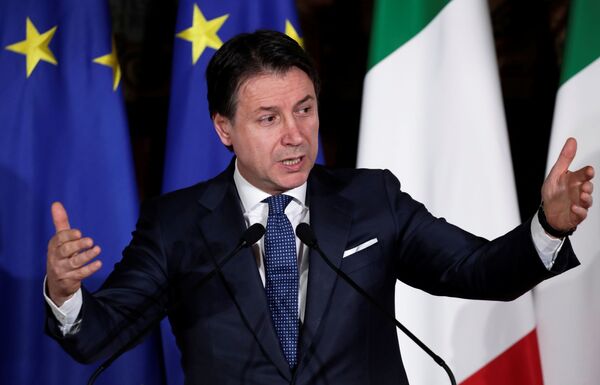 Antonio Tajani, the former president and the current member of the EU parliament, was also frustrated by the EU leaders’ decision to postpone the adoption and implementation of new economic instruments by calling it a “masochistic selfishness” and referring to Europe as “fearful”.

Tweet: A fearful Europe, like the one we saw yesterday, will be overwhelmed by the coronavirus. As we die and the economy plummets, decisions are postponed in two weeks. The masochistic selfishness of the rigorists is short-sighted and dangerous for everyone.

The appeal for an introduction of joint recovery bonds aimed at providing economic relief was voiced by Italian Prime Minister Giuseppe Conte, who asked European leaders for united action to address the pandemic that has taken the lives of more than 13,000 people in Italy and Spain alone. Conte rejected an earlier pre-drafted statement of the summit as the online meeting was still going on, believing that EU leaders’ response to the crisis was too weak.

"Our response will be stepped up, as necessary, with further action in an inclusive way, in light of developments, in order to deliver a comprehensive response”, reads the video summit declaration that was refuted by Conte.

Italian Forein Minister Luigi DiMaio later praised the prime minister’s position by telling Rai 1 television that if Europe wanted “to use old financial instruments” his country would “do it alone”.

Russian Military Experts Arriving in Italy for Assisting Coronavirus Fight to Work in Bergamo - MoD
Italy, as well as Spain and France, has long been pushing for some kind of joint borrowing instrument and a possibility of a “pooled” public debt within the eurozone, but these demands have been refuted by other European countries with stronger economies.

Meanwhile, more than 250,000 cases of novel coronavirus have been reported in European Union member states so far with thousands of people dead, which is creating a strain on the economy that could outlast the pandemic.