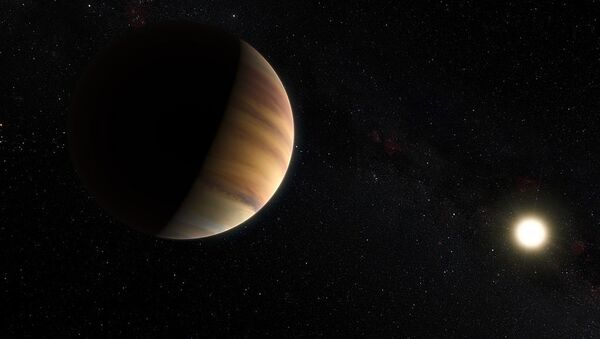 CC BY 4.0 / ESO/M. Kornmesser/Nick Risinger (skysurvey.org) / 51 Pegasi b
Subscribe
Scientists at the University of Colorado Boulder (CU Boulder) have been selected as finalists for NASA’s Explorers Program based on their proposal of a new spacecraft designed to study far-off stars and evaluate their level of radioactivity to determine the habitability of neighboring exoplanets.

Astrophysicist Kevin France is the principal investigator of Extreme-ultraviolet Stellar Characterization for Atmospheric Physics and Evolution (ESCAPE) - a mission geared toward detecting life in the far reaches of the solar system.

Earlier this month, ESCAPE was selected by NASA as one of two candidates to receive up to $145 million in funding to make its proposal a reality.

"NASA and the entire astronomical community have made the search for signs of life on exoplanets a priority," France said in a Thursday article published in the CU Boulder campus digest. France is employed as an assistant professor at the university’s Laboratory for Atmospheric and Space Physics (LASP) and the Department of Astrophysical and Planetary Sciences.

"We believe that detectable life outside the solar system probably relies on the presence of an atmosphere,” he added.

While ESCAPE is not unique in its objective of observing and evaluating the habitability of exoplanets, the means through which it gathers data are uncommon. Rather than directly seeking out the exoplanet itself, the satellite will instead focus on the levels of radiation produced by nearby stars. Stars producing high amounts of radiation - such as ultraviolet light, which the satellite will detect - zap the atmospheres of orbiting exoplanets.

"This high-energy radiation is absorbed in the highest layers of a planet's atmosphere and regulates the escape of an atmosphere to space," LASP research scientist Allison Youngblood said, as reported by the CU Boulder Today. "We must measure the extreme ultraviolet radiation from exoplanet host stars to be able to say whether or not exoplanets can hang on to their atmospheres."

Current estimates from the scientists predict the ESCAPE satellite will be around 7 feet long and over 300 pounds in mass.

Luckily, France is not alone in this endeavor, as the proposed mission is a joint effort by the LASP, Joint Institute for Laboratory Astrophysics and Center for Astrophysics and Space Astronomy at CU Boulder. As a result of NASA selecting them for the project, France’s team has been awarded $2 million to further develop their proposal by the Explorers Program’s 2021 deadline.

“Over the next nine months, we’re going to be making and testing engineering models of some of the more critical parts of the system in order to demonstrate that our design is actually going to perform as well as we think it’s going to,” detailed Brian Fleming, a LASP research professor and ESCAPE instrument scientist.

According to NASA’s March 16 release, the other project up for consideration is the Gravitation-wave Ultraviolet Counterpart Imager. This particular mission intends to utilize two small, independent satellites, each scanning the sky in a different ultraviolet band.

In practice, the satellites would be able to detect the light emitted during an explosion after a burst of gravitational waves, which occurs due to the merging of neutron stars or a neutron star merging with a black hole. Stephen Bradley Cenko, of NASA’s Goddard Space Flight Center in Greenbelt, Maryland, is listed as the mission’s principal investigator.