Dow Plummets Over 900 Points Despite US Stimulus Bill Clearing Congress 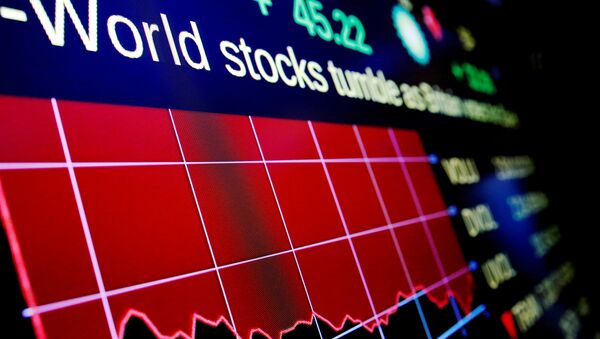 © AP Photo / Lucas Jackson
Subscribe
International
India
Africa
Erasing some of its gains made over a three-day rally, the Dow Jones Industrial Average index took a sharp plunge on Friday despite the US Congress passing a hotly debated stimulus package to blunt the economic downturn caused by the COVID-19 pandemic.

Closing another week of volatile trading, the Dow index fell by 915.39 points, as the S&P 500 slid 88.60 points. The Nasdaq Composite saw a 295.16-point dip into red territory. The Dow’s sharp dive was largely fueled by Boeing’s more than 10% plunge, as well as Disney and Exxon Mobil declining more than 6%.

The day prior, the Dow marked its biggest three-day surge since 1931, having spiked over 20% since opening on Tuesday.

Although most Asian markets managed to maintain their positions in green territory despite a 5% slip by the Australia Securities Exchange index, the same could not be said for European markets, which saw the German Dax Performance index fall by 368.44 points and the UK’s Financial Times Stock Exchange 100 index shrink by 305.40 at closing.

Slumped trading in European markets came as UK Prime Minister Boris Johnson announced earlier Friday that he had tested positive for the coronavirus and as European Union leaders continue to work out how best to protect their nations’ economies amid the COVID-19 pandemic.

With just a few hours before closing, US stocks moved closer to green territory after news broke that the $2 trillion coronavirus relief bill had passed in the US House of Representatives Friday.

The measure was passed despite initial objections by Rep. Thomas Massie (R-KY), who threatened to raise procedural objections that would have required a majority of House members to be present during the vote. The lawmaker’s move immediately drew bipartisan backlash from multiple officials - including US President Donald Trump.

The commander in chief didn’t hold back, lashing out via Twitter and calling Massie a “third rate grandstander … [who] just wants the publicity.”

​Later, moments before the vote was called on Friday, Massie spoke on the House floor. “I came here to make sure our republic doesn’t die by unanimous consent in an empty chamber,” he said, calling for a recorded vote that was subsequently denied. A quorum - a majority of the chamber - was ultimately deemed present, and the bill was passed in a voice vote.

Now having cleared Congress, the relief bill heads to Trump, who has repeatedly indicated that he will sign the measure.

US Leads in Most Recorded Coronavirus Cases

With trading remaining overwhelmingly volatile as a result of the pandemic’s effects on the US economy, investors have only continued to dump risky assets, such as stocks.

“This is going to be an economic fallout,” Gregory Faranello, head of US rates trading at AmeriVet Securities, told CNBC. “We’re seeing in two weeks what we would normally see maybe in a year and a half or two years.”

Since Thursday’s highs, data monitors declared that the US had become the country with the highest number of confirmed COVID-19 novel coronavirus cases, outpacing China, where the outbreak was first reported. Adding to the heightened economic risks, the US government reported Thursday that more than 3 million unemployment claims had been filed in just one week.

Nancy Tengler, chief investment officer at Laffer Tengler Investments, spoke to the Wall Street Journal on the matter and forecast that the recent volatility is likely to continue “for some time.”

“The news is going to be spotty, and investors have been scrambling,” she added.