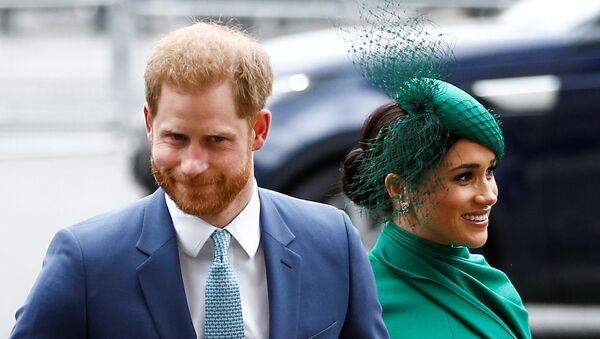 On Wednesday, it was revealed that Prince Charles had tested positive for the novel coronavirus infection, but his son, Harry, did not travel back to the UK to see his father, as his wife reportedly said that “under no circumstances” would she be okay with her husband travelling “anywhere right now” amid the ongoing pandemic.

Britain's Prince Harry, 35, and his spouse Meghan Markle, 38, have moved with their ten-month-old baby Archie from Canada to the United States to establish a permanent residence in Los Angeles City, California, The Sun reported on Thursday.

The Sussexes reportedly flew to Los Angeles in a private aircraft before the border was shut down between the US and Canada due to the ongoing coronavirus (COVID-19) outbreak.

“Harry and Meghan have left Canada now for good. The borders were closing and flights were stopping. They had to get out,” a royal insider said, cited by The Sun. “But this move was planned for some time. They realised Canada would not work out for various reasons and they want to be based in the Los Angeles area. They have a big support network there. It’s where their new team of Hollywood agents and PRs and business managers are based. Meghan has lots of friends there and, of course, her mum Doria”.

Earlier in the day, a trailer for the Duchess of Sussex's first work since the couple split from the UK royal family was released in which she narrates a Disney documentary on elephants. She was said to have donated all her earnings from the film to the Elephants Without Borders charity, a non-profit organization dedicated to conserving wildlife and natural resources.

On Wednesday, it was revealed that the Prince of Wales had tested positive for the novel coronavirus, after the apparent heir to the British throne met with Prince Albert of Monaco two weeks ago, who has also been infected with the virus. The Prince and the Duchess are now in self-isolation at a residence in Scotland.