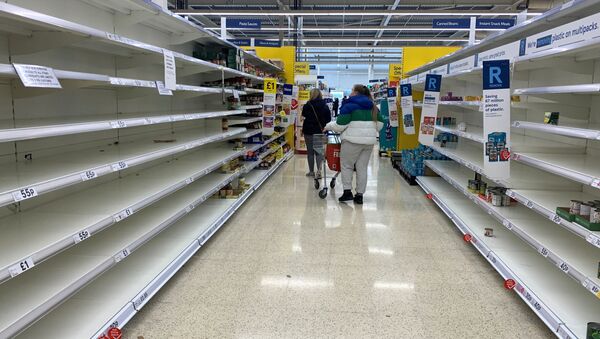 © REUTERS / PHIL NOBLE
Subscribe
International
India
Africa
Chris Summers
All materialsWrite to the author
The British Empire was built on imported food - sugar from the Caribbean, tea from India, fish from Newfoundland and spices from the Far East - and today 50 percent of the UK’s food is imported. Sputnik investigates why the coronavirus outbreak threatens food shortages and a rise in prices.

Britain imports half of its food - the vast majority of it from the European Union: pasta from Italy, cheese and wine from France, fruit and vegetables from Spain, nuts and olives from Greece and grain from eastern Europe and meat and fish from various countries.

There are about a dozen UK companies which dominate the food imports industry.

​They included Hertfordshire-based Lamex, which imports poultry from Brazil and Thailand, seafood from India and China, and 20,000 tons of honey from Argentina and Vietnam.

In a statement on their website Lamex said: “Our priority is the safety and wellbeing of our colleagues, clients and associates, along with our ability to ensure continuity of our business. Currently, operations across Lamex globally continue uninterrupted…We are mindful that our customers and suppliers will also be faced with potential disruptions and uncharted challenges.”

So just start to eat more UK caught fish?
Yes, but it's a lot more complicated that that.....

​Another big importer is Grace Foods - a subsidiary of the Jamaica-based food giant Grace Kennedy - which specialises in bringing in foodstuffs from the Caribbean, including mangoes, coconuts, plantains, tinned goods, drinks and sauces.

On their website they said: "Grace has also been working diligently with our suppliers to ascertain any supply chain risk relating to Covid-19 and taking contingency measures where practicable…Grace will continue to monitor the situation as well as (UK) government announcements and will take the necessary steps to protect our work force and ensure business continuity while maintaining supply to our valued customers."

​IPL, which is based in West Yorkshire and supplies the Asda supermarket chain, imports grapes, citrus fruits, melons, potatoes, onions, nuts and wines and also has a “state-of-the-art banana ripening facility” near its head office in Normanton.

I’m very proud of my colleagues @foodgov, making huge efforts to ensure the supply of safe food - together with farmers, retailers, food manufacturers & local authorities. It is very unlikely that you can catch coronavirus from food. Good hygiene will keep other bugs at bay.

​Merseyside-based Peter Gilding has a round-the-year operation importing fruit from as far afield as Chile, South Africa and New Zealand.

The company’s managing director, Andrew Gilding, said: “Many of our staff are working from home remotely and we are limiting the amount of people in the office.”

He said the company was still managing to import fruit and distribute it to UK supermarkets.

Mr Gilding said the wholesale price of fruit had gone up because international transportation costs had risen.

He said it was unclear yet if there would be shortages of imported foodstuffs or significant price rises in UK supermarkets.

Ivan Glasenberg, CEO of Glencore, said on the company’s website: “We continue to closely monitor and respond to events surrounding the COVID-19 pandemic…Through our business continuity planning, we aim to minimise disruption so we can continue to source and deliver the products that our customers need.” 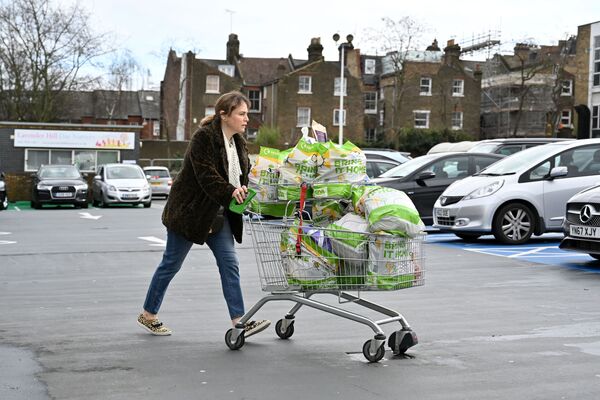 A shopper pushes a trolley load of groceries at a supermarket in London on March 14, 2020, as consumers worry about product shortages, leading to the stockpiling of household products due to the outbreak of the novel coronavirus COVID-19.
© AFP 2023 / JUSTIN TALLIS

Maximo Torero, chief economist of the UN Food and Agriculture Organisation, has warned countries against taking protectionist stances during the coronavirus outbreak for fear of damaging the global trade in food.

Mr Torero told the Guardian: "The worst that can happen is that governments restrict the flow of food. All measures against free trade will be counter-productive. Now is not the time for restrictions or putting in place trade barriers. Now is the time to protect the flow of food around the world.”

​Some countries are concerned about domestic food shortages - Vietnam has suspended exports of rice and Kazakhstan has forbidden the export of wheat flour and other countries are thought to be considering suspending exports of crops and other staple foods.

But it is not just imported food that is under threat.

Every August and September around 60,000 seasonal workers come to the UK from the European Union to pick fruit and vegetables but this year, if the coronavirus outbreak is not over by then, there could be a massive shortage of staff and crops could rot in the ground.

Last week the Country Land and Business Association, which represents UK landowners, called for a Second World War-style "land army" to help with the harvest.

Mark Bridgeman, president of the CLA, said: “We need urgent government assistance to help source workers and advertise positions. Time is of the essence as many farmers will soon begin, or have already begun, planting or harvesting.”

The UK government said it is working closely with the food industry "to ensure the public can safely access the food and groceries they need during this time."

On Wednesday, 25 March, Environment Secretary George Eustice urged people not to engage in panic-buying or hoarding of food.

He said: "When shopping for you and your own family, only buy what you actually need. Buying more than you need means others will be left without. It is making life more difficult for those front line workers – nurses, doctors, vital NHS support staff who are working so hard in such difficult circumstances."

If UK consumers take notice and avoid panic buying the UK may be able to avoid food shortages, unless the government decides to close the borders and stop food imports, which is unlikely.