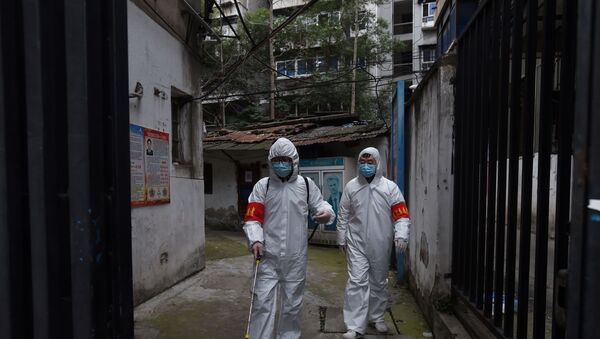 © REUTERS / STRINGER
Subscribe
The US Secretary of State previously slammed China for providing 'imperfect coronavirus data' and expressed his frustration about the difficulty of obtaining from Beijing the information necessary to develop vaccines.

All the G7 nations are "deeply aware of the disinformation campaign" that China is leading in regard to the coronavirus epidemic, the US Secretary of State Mike Pompeo said on Wednesday. The top US official stated that the world still needs accurate information from Beijing about the deadly virus.

G7 Foreign Ministers held a video call earlier today during which they committed to continue cooperation in the fight against the coronavirus. This is the second meeting to be held by video link to avoid the threat of coronavirus spread.

Mike Pompeo previously lambasted Beijing for putting the US "behind the curve" by not sharing adequate information with the United States on the coronavirus disease. Pompeo also accused actors in China, Russia and Iran of spreading fake news related to the coronavirus outbreak.

In his turn, US Defence Secretary Mark Esper earlier this week announced that the Pentagon would set up "a myth-busting website" to counter coronavirus (COVID-19) disinformation "disseminated partially by foreign actors".

Beijing dismissed Washington's claims about China, Russia and Iran as careless and laughable.

China's Foreign Ministry underlined that the PRC had shared information on the epidemic with the World Health Organisation and other countries, including the United States, in a timely manner.

The outbreak of the new coronavirus, also known as COVID-19, was first reported in China in late December. It later spread to 195 countries and was declared a pandemic. As of now, there are 375,498 confirmed cases of the virus globally.

China still has the most confirmed cases, but in recent weeks the spread of the virus appears to have been brought under control in China as Europe has become the new epicenter of the disease.

000000
Popular comments
'I was the CIA director. We lied, we cheated, we stole. It’s – it was like – we had entire training courses. It reminds you of the glory of the American experiment' - Pompeo