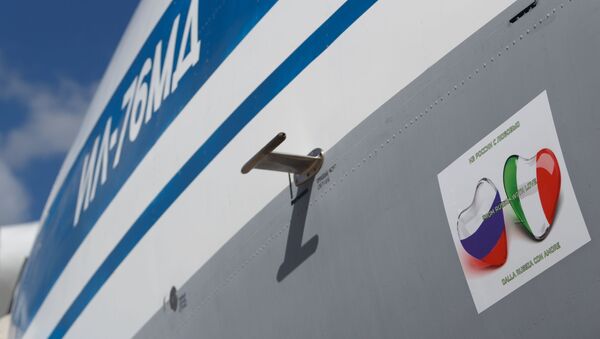 While the European Union has failed to provide coordinated assistance to Italy in time to prevent the virus, Russia has filled in and dispatched military health workers, virologists and equipment to help the country handle the pandemic.

A video went viral of an Italian man replacing a European Union flag with a Russian one, in a gesture of gratitude to Moscow for helping combat the coronavirus crisis.

Federico Cane, of Omegna in northern Italy, on Monday posted a video to Facebook of himself defiantly removing an EU flag from a floor stand.

He holds up a piece of paper reading in Italian, “Thank you Putin. Thank you Russia,” before he places a Russian tricolour next to an Italian flag.

Dante Cattaneo, a Matteo Salvini ally and deputy mayor of the commune of Ceriano Laghetto in Lombardy, has shared a video of himself thanking Russian President Vladimir Putin and the Russian people for their help. In what he called a symbolic gesture, he put on a sweat jacket sporting the word “Russia”.

Another video that praises Russian assistance and derides the EU’s lack of response shows Russian planes landing in Italy followed by a clip of European Commission President Ursula von der Leyen showing how to wash hands. “A friend in need is a friend indeed,” reads the caption. “And Europe is washing its hands.”

Russian President Vladimir Putin on Saturday promised to send medical personnel and supplies to Italy after speaking over the phone with its Prime Minister Giuseppe Conte. The first military plane with desperately-needed supplies arrived in Italy the following night.

Since Saturday’s phone call, a total of 14 Russian Il-76 aircraft have delivered eight medical teams, over a hundred military virologists, and diagnosis and disinfection equipment to Italy’s Pratica di Mare air base just outside of Rome. Russian medics will be working in the city of Bergamo, Lombardy, Italy’s worst-affected city.

The EU has failed to act on Italy’s desperate pleas for extra supplies of medical equipment as the country became Europe’s epicentre of the pandemic and faced overwhelming pressure on its healthcare system.

The most significant assistance came just last week when the EU decided to allocate to Italy all of China’s latest donation, which included test kits and masks.

On 11 March, the day Italy was well into the outbreak with over 12,400 coronavirus cases confirmed, its point man for the EU Maurizio Massari criticised the bloc for a lack of response to the crisis.

“Italy has already asked to activate the European Union Mechanism of Civil Protection for the supply of medical equipment for individual protection,” he wrote in a Politico op-ed. “But, unfortunately, not a single EU country responded to the Commission’s call. Only China responded bilaterally. Certainly, this is not a good sign of European solidarity.”

Since the coronavirus outbreak started in China late last year, Italy has become one of the world’s most affected countries, with close to 64,000 confirmed cases and around 6,100 deaths as of Monday. Testing for the disease has often been limited to those admitting themselves to hospital, which means that the majority of cases may have gone undetected.

Despite the virus infecting less people than in China, Italy has the world’s highest death toll – something analysts attribute to its proportionately more elderly population. The coronavirus-related death toll in Italy appears to have slowed down, with authorities reporting a smaller day-to-day increase in new cases for two days straight on Monday.