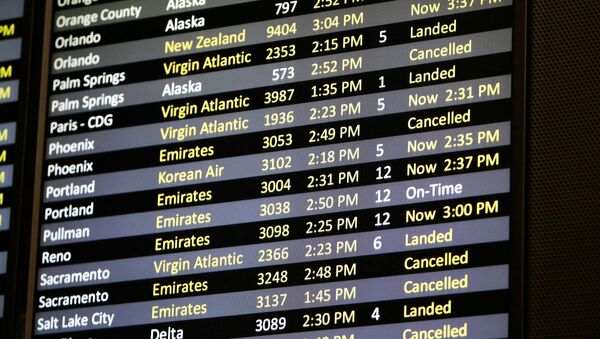 © REUTERS / JASON REDMOND
Subscribe
Over 100 new deaths from the COVID-19 novel coronavirus pandemic were reported in the US on Monday, with governors taking actions such as restricting group sizes and closing bars and restaurants, as US President Donald Trump’s administration is looking to hasten containment efforts using more drastic means.

US airlines are reportedly considering a virtual shutdown of passenger flights amid the COVID-19 novel coronavirus pandemic, according to a report by The Wall Street Journal.

An industry official cited by the publication suggested that  airlines would “definitely prefer” if a decision regarding a possible shutdown would come from the government, as this might be used as “leverage during calls for federal aid”.

However, the sources claim the White House has been hesitant to go so far as to ground all commercial flights, in part due to these aircraft also delivering US mail and providing essential cargo shipments.

Commercial jets of the Civil Reserve Air Fleet, used by the Pentagon during national emergencies, were suggested by sources as a potential means of dodging this hurdle and allowing the government to maintain cargo shipments. For this to go ahead, the Pentagon or White House would need to be required to activate an appropriate move.

The implementation of any shutdown, claimed the officials who were cited by the WSJ, would take several days. 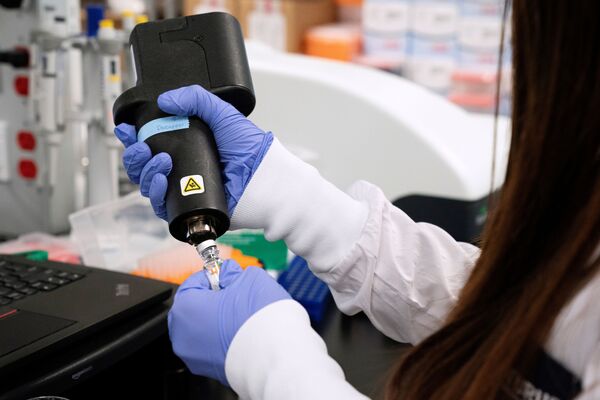 Industry and federal officials cited by the publication stopped short of admitting any definite final decisions had been taken either by the carriers themselves or the White House, yet airline officials, pilot union leaders and federal transportation officials were reportedly of the opinion that under the current circumstances a shutdown seemed increasingly unavoidable.

Officials suggested other, less drastic options were also on the table, yet the publication cites the concerns of Federal Aviation Administration officials that the respiratory disease pandemic might spread among agency controllers and technicians.

There has been no official comment from the Pentagon or the White House.

Traffic-control facilities are already struggling as close to as dozen personnel have recently tested positive for the virus.

The financial toll from the pandemic has been impacting US airlines as the spread of COVID-19 has resulted in the flow of passengers plummeting due to the cancelling of a majority of international flights.

Currently, US domestic flights are set to be slashed by around 40 percent, as the US Transportation Security Administration (TSA) cites an 80 percent scaling down of passenger numbers on Sunday, 23 March, as compared to the same day last year.

Flightaware.com. data shows that dwindling travellers have forced carriers like American Airlines and United Airlines to cancel more than 40 percent of their flights on 24 March.

Monday, 23 March, brought reports of over 100 new deaths registered in the US due to the COVID-19 epidemic, reported CNN.

Governors were speeding up measures such as the restriction of group sizes, closing bars and restaurants, as at least 15 states issued stay-at-home orders that require US residents to refrain from engaging in nonessential travel. 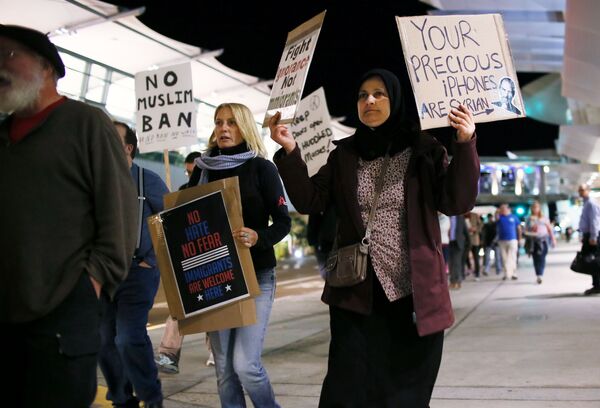 Protesters chant during a rally against the travel ban at San Diego International Airport on March 6, 2017 in San Diego, California
© AFP 2022 / Sandy Huffaker

The US state of Rhode Island is delaying both its Democratic and its Republican presidential primaries due to the pandemic, according to an executive order signed by Governor Gina Raimondo on Monday, after a number of other states such as Ohio, Georgia, Louisiana, Connecticut and Kentucky postponed their primaries until summer.

More than 42,000 people in the United States have been infected with coronavirus, and at least 515 people have died.