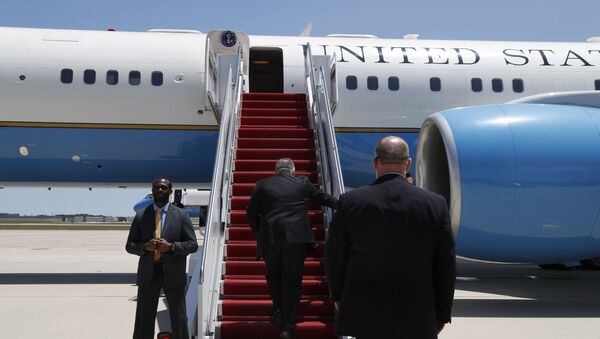 US Secretary of State Mike Pompeo is in Doha, Qatar, where he will meet with top Taliban negotiators to discuss the next phase of the peace agreement signed last month between Washington and the Afghan militant group.

Pompeo's visit to Doha comes immediately after a trip to the Afghan capital of Kabul, where he met with Afghan President Ashraf Ghani and his political rival, Abdullah Abdullah, who has also claimed to have won the September 2019 presidental election.

The February peace deal, which saw the Taliban agree to reduce violence and begin talks with the Kabul government as the US withdraws several thousand troops from Afghanistan, hit several snags very quickly, including Kabul's unwillingness to abide by a US-promised mass amnesty of Taliban prisoners, as well as the lack of a comparable ceasefire between the Taliban and the Kabul government, which the Taliban doesn't recognize as legitimate.

Pompeo's trip comes amid a travel ban by the State Department on Americans going abroad in a bid to quell the spread of the COVID-19 virus, which has infected more than 350,000 people worldwide, including nearly 40,000 Americans.