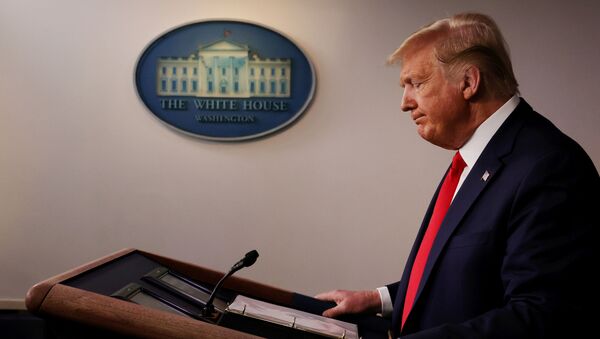 © REUTERS / Jonathan Ernst
Subscribe
International
India
Africa
So far, the number of confirmed coronavirus cases in the United States has reached 32,644, according to the Johns Hopkins University, which puts the US in third place in terms of its COVID-19 toll, surpassed only by China and Italy.

President Donald Trump said on Sunday he had approved New York and Washington's requests to declare a major disaster in the two states amid the COVID-19 pandemic, adding that he will approve California's request soon, "maybe tonight".

According to President Trump, the US federal government will fully cover the costs of deploying national guard units in the states of New York, California, and Washington to help fight the coronavirus.

"Today I'm announcing action to help New York, California, and Washington ensure that the national guard can effectively respond to this crisis", Trump said on Sunday.

Other states most affected by COVID-19 will receive help too, the president said.

"Through FEMA [federal emergency management] the federal government will be funding 100 percent of the cost of deploying national guard units to carry out approved missions to stop the virus, while governors remain in command", Trump said.

.@realDonaldTrump: “Today, I am announcing action to help New York, California, and Washington ensure that the @USNationalGuard can effectively respond to this crisis...Through @FEMA, the federal government will be funding 100% of the cost...” #COVID19 pic.twitter.com/uYpN4QCWL4

The president also said the US is mobilising all resources available to combat the spread of the virus and said it was important that US citizens followed federal guidance on social distancing.

Trump referred to the coronavirus outbreak in the country as a "great national trial".

President @realDonaldTrump: "We're enduring a great national trial, and we will prove that we can meet the moment ... No American is alone as long as we are united." pic.twitter.com/MbdWe6zoQx

According to Trump, emergency medical stations will be deployed to help treat coronavirus patients in three US states and that a US naval hospital ship will be sent to Los Angeles.

The president added that the US naval hospital ship USNS Mercy will be deployed to Los Angeles. Trump said the ship has "tremendous capacity".

Trump also said he was considering the release of elderly non-violent prisoners.

US Vice President Mike Pence says that 254,000 US citizens have been tested for coronavirus under the federal programme, and over 30,000 have tested positive. These figures do not include local tests, he added.

As of today, the United States has reported a total of 32,644 cases of the new coronavirus and at least 409 deaths from the disease, the Johns Hopkins University Coronavirus Resource Center count shows.

New York remains the hotbed of coronavirus in the US, with the highest number of cases registered - a total of 15,168, according to Governor Andrew Cuomo, and at least 114 people have died so far.

Washington has a total of 94 deaths reported so far.