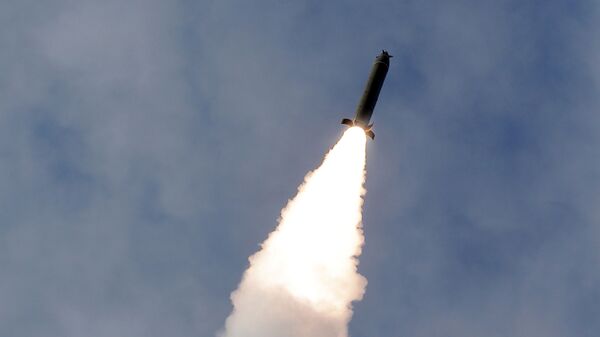 "The test launch has clearly demonstrated the features of guided missiles, including the differently defined trajectories and incidence angles, the accuracy of hitting the target and the warhead's power", the North Korean state-run Korean Central News Agency (KCNA) said.

According to the report, the launch was attended by North Korean leader Kim Jong-un who said that these missiles, along with other ones currently in the works, would make a "decisive contribution" to implementing the country's strategic goals, namely an "epochal change of its defence strategy".

"We must strengthen our firepower in order to be able to destroy any enemy outside our territory should they dare to conduct military operations against our country. This is precisely the party’s set goal of building national defence and the most advanced defence strategy and deterrence force", Kim Jong-un was quoted as saying.

On Saturday, South Korean media reported, citing the Joint Chiefs of Staff, that North Korea had fired two short-range ballistic missiles from North Pyongan Province toward the Sea of Japan. The South Korean military later identified them as short-range missiles that flew some 250 miles at a 31-mile altitude.

This launch is already Pyongyang's third this year, with the first two conducted on 2 March and 9 March. In late 2019, North Korea carried out a series of weapons tests, the last one that year was in November, when Pyongyang fired two short-range projectiles towards the Sea of Japan.