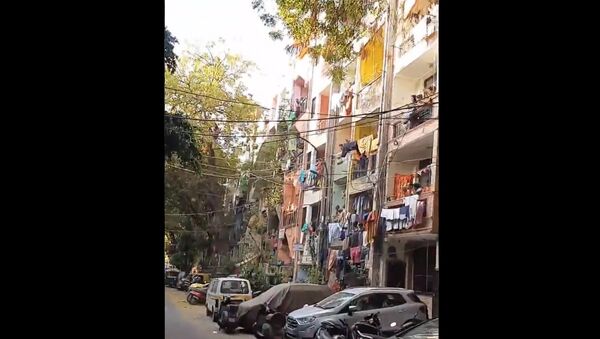 New Delhi (Sputnik): For the very first time, some 1.2 billion Indians went into a self-imposed curfew after the Indian prime minister called for a “Janta Curfew” (Public Curfew) to motivate and thank police personnel, officials, doctors, nurses, and many others working tirelessly at the front line to fight the COVID-19 pandemic in India.

People across India enthusiastically took part in thanking the doctors, nurses, and emergency personnel who are putting their lives on the line to fight the pandemic on 22 March at IST 5 pm.

People joined from their houses’ balconies while following the lockdown and showed support in numbers by beating utensils, bells, and blowing conch, apart from clapping. The sound of conch is in Hinduism believed to expel negative energies.

Residential societies in Delhi’s adjoining Noida joined in force to raise a collective voice against the coronavirus.

​The Indo-Tibetan Border Police (the force guarding the India-China border) joined the voluntary campaign from Lohitpur in Arunachal Pradesh.

​People from Delhi’s Jangpura and the anti-citizenship law protest site showed their support for the noble cause and took part by clapping, beating utensils, and even playing tabla.

Taking to Twitter, some netizens said they got goosebumps by witnessing the “once-in-a-life time moment", while others pointed out that they had tears in eyes due to the overwhelming moment.

Appreciating his countrymen’s support, Modi said on Twitter that it is the sound of gratitude, but also the beginning of victory in a long battle.

“Let us, with this determination, tie ourselves in social distancing for a long battle with this restraint,” said Modi on Twitter.
He added that the country thanked each person who led the fight against the coronavirus. “Many thanks to the countrymen”.​

​As per the Indian Health Ministry, India has a total 341 cases of coronavirus at various states. According to media reports, seven people have died due the virus. Indian Railways, which carries around 24 million passengers daily, have been shut down across the country till 31 March. Several states, such as Delhi, Maharashtra, Rajasthan, Mizoram, and Goa, have announced partial lockdowns to curb the spread of the disease.