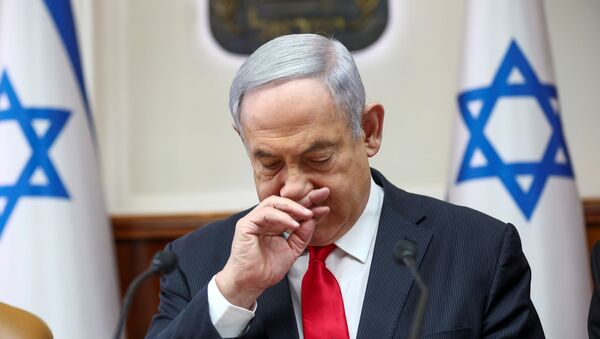 Oleg Burunov
All materialsWrite to the author
The political gridlock in Israel shows no sign of abating even after holding its third parliamentary elections in a year in early March, amid attempts by Prime Minister Netanyahu’s Likud and the Blue and White alliance to form a coalition government.

In an interview with Israel’s Channel 12 on Saturday, Prime Minister Benjamin Netanyahu claimed that his Likud and the Blue and White alliance led by Benny Gantz had wrapped up talks on a possible line-up of a national unity government.

This stipulates that he would first serve as prime minister to later be replaced by Gantz.

"I will leave office on the agreed date. There will be no shticks and tricks. Millions of Israelis are waiting for us”, he pointed out.

Gantz, however, rejected Netanyahu’s claims, saying that “those who want unity do not work with ultimatums and harmful leaks and certainly do not try to hurt our democracy and citizens by paralysing the Knesset”.

The statement comes after Gantz wrote on his Facebook page on Friday that he is working to form “a wide, stable, and statesmanlike government” since he received the relevant mandate. He voiced hope that such a cabinet will know how to grapple with what he described as the “great challenge” that Israel is now facing.

“There will not be a government if there will not be a functional Knesset, as is needed in a democracy. In a democratic regime, the legislature cannot be paralysed and prevented from expressing the will and the votes of citizens. Anyone who thinks he can advance us to a dangerous borderline dictatorship is mistaken”, Gantz pointed out.

The remark followed Israeli President Reuven Rivlin summoning Netanyahu and Gantz late last week for an "urgent conversation" to discuss the "possibility of forming a government immediately", according to a presidential office statement.

Referring to Israel currently facing a “global and national emergency”, Netanyahu for his part urged Gantz last Sunday to “unite forces and establish a strong and stable government that can pass a budget and make tough decisions”.

“I returned and passed a motion this morning to Blue and White Chairman Benny Gantz and his friends to join a national emergency government led by me”, Netanyahu tweeted.

Israel held its third parliamentary elections in a year on 2 March, in an effort to solve the ongoing the political deadlock. Earlier, neither Likud nor the Blue and White were able to form a coalition government following two inconclusive votes in April and September of 2019.

The 2 March vote saw Likud in the lead with 36 spots in the 120-seat parliament. Blue and White came in second with 33 mandates, followed by the Joint List of Arab parties with 15 seats, and the pro-Netanyahu Shas party with nine seats.

The elections were held as Netanyahu is facing charges of fraud and breach of trust in a series of graft probes that include buying positive press and receiving gifts from a rich donor. The 70-year-old’s trial has been postponed because of restrictions imposed to contain the spread of the coronavirus, which has already seen more than 880 infected across Israel. The prime minister, who denies all the accusations, will now need to appear in court on 24 May.