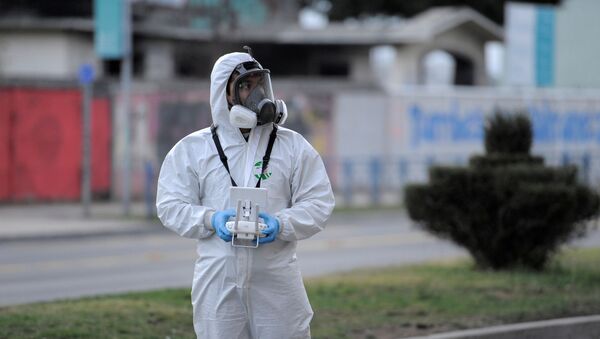 China, Italy, and the United States are leading the global COVID-19 toll so far, according to Johns Hopkins University, while Spain, Germany, and Iran continue to report mass increases in the number of infected people.

The coronavirus pandemic, declared by the World Health Organisation (WHO) on 11 March, continues to rage around the globe, as several more countries have reported new cases of the disease, including several states in Africa and Latin America.

While the number of infections is surging in Europe (mostly Italy, Spain, and Germany), and in the United States, the country of origin for the virus, China, and South Korea have seen a decline in the number of cases and deaths registered per day.

Governments around the world have stepped up measures to curb the spread of the virus, including imposing partial/nationwide quarantines, cancelling mass activities, and suspending flights both to and inside the countries.

"Venezuela has recorded 77 cases, all of them were imported", Venezuelan President Nicolas Maduro said in an address broadcast on Twitter.

"The minister of health advises the public that Dominica has recorded its first case of COVID-19 today, March 22, 2020. The patient is a 54-year-old Dominican citizen who recently returned to Dominica from the United Kingdom", Dominican Minister of Health, Wellness and New Health Investment Irving McIntyre confirmed on Sunday.

He said the patient had been placed in home quarantine since arrival and would be treated in a special isolation unit under constant medical surveillance.

"Starting today, Sunday, 22 March, Jorge Chavez International Airport will be closed. There will be no commercial flights and airport operations will stop during the isolation period. Only cargo flights will continue to operate normally", the airport said in a press release.​

According to the text, all flights from Sunday on will be scheduled by the Peruvian authorities and Group 8 of the Peruvian Air Force.

250 people have recovered in the past 24 hours, according to the Korea Centers for Disease Control and Prevention (KCDC).

The total death toll stands at 111.

"The patient suffered from a chronic lung condition", the Institute for Public Health in Podgorica said.

The patient was a 65-year-old male who was hospitalised on Sunday morning. He tested positive for COVID-19.

"Testing is more and more available every single day … at this dayэs reporting 254,000 Americans have been tested and received results ... with slightly more than 30,000 testing positive, Pence said on Sunday, at a press conference with US President Donald Trump.

"The second Il-76 military transport aircraft of the Russian Aerospace Forces with a group of Russian military specialists and equipment for diagnostics and disinfecting measures arrived at the Pratica di Mare Air Base in Italy", the Russian Defence Ministry said.

Egyptian major general Khaled Shaltout, the chief of staff for water administration who was personally engaged in measures to fight the virus spread across the country, is among the deceased patients, Al-Ahram newspaper reported citing the armed forces.

The plane has landed in the Pratica di Mare airbase, the Russian Embassy in Rome told reporters on Sunday.

According to Focus Online, the number of people infected with COVID-19 has reached 24,819.

The deceased patient was a 95-year-old man with a record of other health issues, according to the chief of the Czech crisis committee.

The patient was a citizen who had recently arrived from abroad, the Syrian state-run Ikhbariya broadcaster said.

Sham FM radio station said that the virus was detected in a 20-year-old female.

"In France, there are 16,018 cases, 35 percent of those infected are people under 65", the country's director general of health, Jerome Salomon said at a briefing, adding that 674 people died, while 7,240 more were hospitalised.

So far, the UK Department of Health and Social Care has confirmed 5,683 cases of COVID-19 in the country and 281 fatalities.

Greek Prime Minister Kyriakos Mitsotakis announced on Sunday a complete ban on travel and the movement of citizens to prevent the further spread of the coronavirus.

The minister also said in a televised address that the ban would take effect since 06:00 a.m. local time [04:00 GMT] on Monday, and those violating the restriction would 150 euros (about $160) fine.

So far, Greece has registered over 600 confirmed cases of the disease and 15 fatalities. Meanwhile, 19 patients have recovered.

Turkish Airlines to halt all its international flight except for flights to Hong Kong, Moscow, Ethiopia, New York and Washington, CEO Bilal Eksi said on Twitter.

We’ll still be on air next week as normal m, apart from Friday. From 30th onwards we’ll be on three times a week.

"Group meetings of people in public places, in apartments, in private houses are unacceptable due to the serious situation in our country. Violations of the contact restriction regime should be monitored by law enforcement agencies and the police, the repeated violation will be punishment", Chancellor Angela Merkel told reporters.

In addition, the government and the federal states agreed to tighten measures regarding freedom of movement of citizens in the country due to the epidemiological situation, the chancellor said.

The overall number of people who had contracted coronavirus in Romania has increased to 433, while two people have died of the infection, media reported on Sunday, citing the governmental Strategic Communications Group, which deals with all public communication related to the COVID-19 outbreak.

According to Digi 24 broadcaster, the second COVID-19 victim in the country was 74 years old.

"Over the past 24 hours, 1,028 new cases of the coronavirus were detected, To date, 21,638 cases of the infection have been reported. Unfortunately, [over the last 24 hours], 129 patients have died, the total death toll has reached 1,685", Alireza Vahabzadeh, an adviser to the country's health minister, wrote on Twitter.

Emergency physician Jean-Jacques Razafindranazy, who worked in the Compiègne hospital centre, succumbed to the coronavirus late on Saturday, according to an official statement.

"Since midnight [21:00 GMT] on 23 March, regular flights from Moscow to Istanbul will remain, charter flights [will remain] until Russian citizens are fully transported to [Russia]", the agency said.

The ministry added that nine Il-76 military transport aircraft with trained crews had been transferred to the Chkalovsky military airfield in the Moscow Region from the Pskov, Ulyanovsk, and Orenburg regions.

The group of about 100 people, including experienced virologists and epidemiologists, is ready to depart for Italy, the ministry said.

On Saturday, Russian President Vladimir Putin told Italian Prime Minister Giuseppe Conte by phone that Moscow was ready to promptly assist Rome in the fight against the coronavirus. The defence ministry then said that Russia would send eight mobile teams of Russian military virologists and doctors, vehicles for aerosol disinfection, and medical equipment to Italy.

Indian Railways, which carries over 2.3 million passengers daily has shut down its operations until the end of the month. All trains except those delivering goods will be suspended. Only trains that departured on or before 4 a.m. on Sunday, 22 March will be allowed to finish their journey.

Passengers on international flights will undergo passport, customs, and quarantine inspection at these points of entry, after which, if they "meet the epidemiological requirements", they will be allowed to fly to Beijing on the same flight.

These measures may be adjusted depending on how the epidemiological situation develops, CAA said.

According to the local authorities, the deceased was a 63-year-old man, who had health issues other than the coronavirus.

The man who died was a 58-year-old taxi driver, the health ministry confirmed.

According to Czech Interior Minister Jan Hamacek, an An-124 Ruslan aircraft landed in the Czech Republic overnight Sunday with a multi-ton cargo of medical equipment on board that included five million masks, two million respirators, 200,000 testing systems, 120,000 protective suits, and 80,000 goggles.

"All delivered materials will be taken to the Interior Ministry's warehouse nearby from where they will be then distributed among medical institutions. The aircraft will head to Leipzig to change the crew, and then Ruslan will go to China again to get the next batch of medical supplies for the Czech Republic", Hamacek said.

He said masks and respirators would also be transported from China to the Czech Republic by the aircraft of China Eastern airlines.