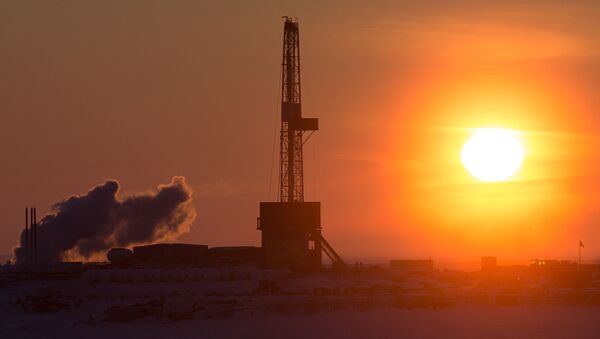 Tim Korso
All materialsWrite to the author
US President Donald Trump used to complain about the high oil prices that came as a result of the OPEC+ agreement, which saw many oil-exporting countries cut crude production. Now, however, is unhappy with the anomalously low price of black gold that is threatening to kill the American shale oil industry.

Commenting on the ongoing oil price free fall, US President Donald Trump accused Russia and Saudi Arabia of initiating a global price war, also claiming that their economies would suffer the most as a result.

What he didn't mention is that the US economy, specifically the shale oil sector, would also be affected as the price for oil has come close to the cost of production for American energy companies. Trump, however, promised that he might get "involved" in the situation on the global oil markets, albeit without going into details. A recent report by The Wall Street Journal, citing anonymous sources, suggested that this "involvement" could include measures to force the biggest producers to cut oil output: sanctions against Russia and diplomatic pressure on Saudi Arabia.

Why the Sudden Interest in the Oil Price Drop?

The US president's interest in changing the situation on the oil markets is due to frustration over another setback on the road to energy independence, Dr Cyril Widdershoven, a veteran global energy market expert and advisor at several international think tanks, believes. As long as the US shale oil industry remains insecure and non-sustainable, Washington is dependent on external crude sources and hence can't fulfil its "long dream of less engagement in global geopolitics", the expert adds.

"In the short term, US shale is not going to die, long-term if all is kept in place, bankruptcies and financial clashes will be part of US shale for sure", Widdershoven said.

Widdershoven points out that Trump just recently sought another change to the oil price - he actually complained about it being too high due to cuts as a result of the OPEC+ deal, blaming - unsurprisingly - Russia and Saudi Arabia the most. The situation has changed since then, not only thanks to these two countries' actions, but also due to the "toxic combination" of the coronavirus' effects on the global economy and the possible resulting recession, the economist notes.

There is another reason for Trump to get "involved" in the global oil price turmoil, Widdershoven points out - he is vying for re-election this year and a significant portion of his supporters are engaged in shale oil and gas production. The expert adds that he can't afford to lose votes due to failing oil companies and temporary economic woes due to the coronavirus.

While reports about Washington's alleged plans to influence global black gold production remain unconfirmed, experts interviewed by Sputnik believe that it would be a poor choice for POTUS if he really wants the market turmoil to end. 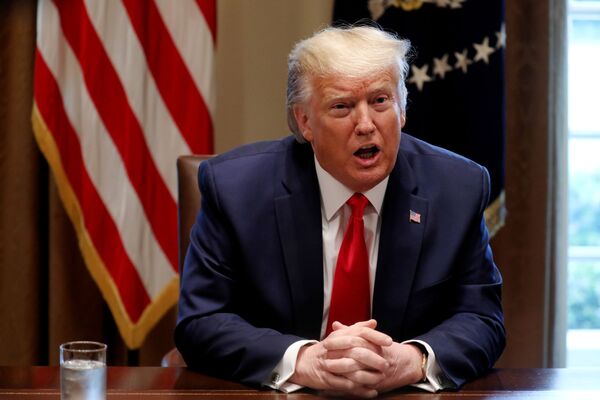 U.S. President Donald Trump speaks as he meets with representatives of U.S. nurses organizations on coronavirus response in the Cabinet Room of the White House in Washington, U.S., March 18, 2020
© REUTERS / LEAH MILLIS

Instead, Trump should facilitate a dialogue between the key contributors to the excessive supply of crude that is pushing the prices down, including Russia and Saudi Arabia, Bjarne Schieldrop, the chief commodities analyst at SEB and a leading Nordic financial services group, thinks.

"If Donald Trump really wants to intervene here he should invite all oil producers: OPEC, Russia, Equinor, Exxon, Eni, BP, Shell, Shale oil... to a meeting and to ask them to cooperate on production cuts. In this way all would share in on cuts, all would avoid too much pain from surplus and low prices", he said.

Widdershoven, on the contrary, advises POTUS against intervening in the Russia-Saudi-UAE negotiations on oil that he is confident are secretly ongoing. The energy sector expert explains that a blockade of OPEC-Russian crude would only drive the prices further down.

The analyst adds that the US doesn't actually have the "instruments" to put heavy pressure on the Russian-OPEC tandem and that Moscow and Riyadh will not bow to Washington, if nothing else simply to show that they are not susceptible to it. Widdershoven concludes that the quickest way for Trump to end the oil price turmoil is to actually avoid meddling in the matter.

"Further unrest in oil and gas globally is NOT going to help Trump. The current short-term optimism in [the] US stock exchange and prices could be a fata morgana, as long as Putin and [Mohammad bin Salman] are not willing to talk to each other openly", he said.

000000
Popular comments
The Usa have in Washington a big problem .... non of the political leaders and for sure also not president Trump have "Business man brains" there only can think in norms from sanctions and force by/with arms !!! The World is very lucky Russia and China don't like to go to WAR !!! But by all means there are not afraid of the Usa / Nato !!!

TG
21 March 2020, 22:51 GMT10
000000
FeEisi, Maximum pressure hasn't worked on Iran so what makes you think it will work on Russia, which has done quite well under a raft of US sanctions whose effect have been to strengthen, not weaken, the Russian Federation? Any sanctions should be considered as an attack against a sovereign country, during covid19 or otherwise. In a way I hope Trump will try, all the more the pleasure of watching this a**hole and his ilk circle and disappear into a massive black hole of debt and bankruptcies.
thesandman
21 March 2020, 23:04 GMT10
000000
Newsfeed
0
New firstOld first
loader
LIVE
Заголовок открываемого материала
Access to the chat has been blocked for violating the rules . You will be able to participate again through:∞. If you do not agree with the blocking, please use the feedback form
The discussion is closed. You can participate in the discussion within 24 hours after the publication of the article.
To participate in the discussion
log in or register
loader
Chats
Заголовок открываемого материала
Worldwide
InternationalEnglishEnglishMundoEspañolSpanish
Europe
DeutschlandDeutschGermanFranceFrançaisFrenchΕλλάδαΕλληνικάGreekItaliaItalianoItalianČeská republikaČeštinaCzechPolskaPolskiPolishСрбиjаСрпскиSerbianLatvijaLatviešuLatvianLietuvaLietuviųLithuanianMoldovaMoldoveneascăMoldavianБеларусьБеларускiBelarusian
Transcaucasia
ԱրմենիաՀայերենArmenianАҧсныАҧсышәалаAbkhazХуссар ИрыстонИронауОssetianსაქართველოქართულიGeorgianAzərbaycanАzərbaycancaAzerbaijani
Middle East
Sputnik عربيArabicArabicTürkiyeTürkçeTurkishSputnik ایرانPersianPersianSputnik افغانستانDariDari
Central Asia
ҚазақстанҚазақ тіліKazakhКыргызстанКыргызчаKyrgyzOʻzbekistonЎзбекчаUzbekТоҷикистонТоҷикӣTajik
East & Southeast Asia
Việt NamTiếng ViệtVietnamese日本日本語Japanese中国中文Chinese
South America
BrasilPortuguêsPortuguese
NewsfeedBreaking
19:00 GMTFrom Trade to Space Cooperation: Highlights of Putin-Modi Talks at 21st India-Russia Annual Summit
18:39 GMTEx-DC National Guard Official Slams Testimonies of Pentagon Generals on 6 January as Absolute Lies
18:23 GMTDems Growing Increasingly Concerned by Midterm Prospects as Biden Polling Numbers Drop
18:21 GMTWhite House Confirms US Will Not Send Representation to 2022 Winter Olympics in Beijing
17:32 GMTKorean Treat and Eurovision Winner Among Most Mispronounced Words of 2021
17:24 GMTWhitehall Union Claims Victory After Court Dismisses its Case Against Johnson and Patel
17:14 GMTPope Francis Stumbles on Airstair as He Boards Plane in Greece - Video
17:02 GMTTrump’s Social Media Listing Vehicle Says Under Inquiry From US Securities Investigators
16:47 GMTRussia, Egypt Start Naval Phase of 'Bridge of Friendship-2021' Drills in Mediterranean
16:40 GMTUS Reportedly Mulls Cutting Russia Off SWIFT, Sanctioning Energy Producers & 'Putin's Inner Circle'
16:37 GMTFinland’s PM Parties at Nightclub Until 4am After Contact With COVID-Positive Official
16:14 GMTSecond Week of Ghislaine Maxwell Sex Scandal Trial Kicks Off
15:56 GMTBoost for Britain! Is the UK’s COVID-19 Third Jab Campaign Saving Lives?
15:55 GMTWestminster Preparing 10-Year War on Drugs in Attempt to Defeat County Line Gangs
15:44 GMTIsrael Will Reportedly Push US to Strike Iranian Facility Amid Lack of Progress in Vienna Talks
15:41 GMTAmerica Unveils First-Ever Strategy to Battle Corruption at Home and Abroad
15:30 GMTChina May Build Military Base in Equatorial Guinea Amid Beijing’s Tensions With Washington
15:15 GMTKremlin: Putin Will Listen to Biden's Proposals on Ukraine 'With Great Interest'
15:15 GMTNYC to Use 'Preemptive Strike' Against Omicron With Vaccine Mandate for all Businesses, Mayor Says
15:08 GMT3,000 Security Officers Guard India's Mathura as Hindu Group Threatens to Install Idol in Mosque