UFC Star Conor McGregor Beats The Hell Out of… Coronavirus 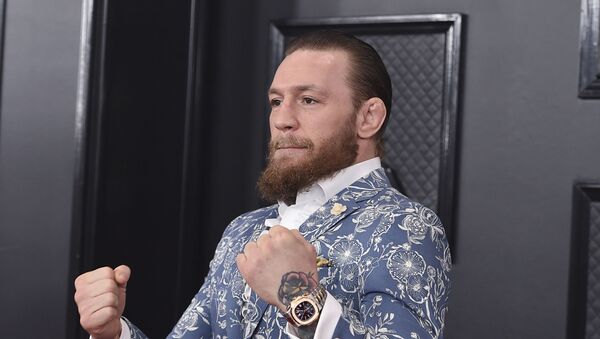 © AP Photo / Invision/Jordan Strauss
Subscribe
The 31-year-old Irishman has been a vocal critic of the coronavirus outbreak, urging his multi-million army of followers on social media to maintain personal hygiene and practice social distancing to prevent the spread of the infectious disease.

UFC star Conor McGregor has beaten the hell out of… the coronavirus, posting a photo on his Instagram account that shows the athlete kicking a sparring partner with the COVID-19 virus photoshopped over his head. The caption for the photo reads: "Take that coronavirus".

The post comes a week after McGregor caused controversy on social media by announcing that his aunt had died, with the athlete blasting coronavirus. “I couldn’t go live anymore. My poor little friendly loving auntie. This stupid f**king virus. What the f**k is happening”. Days later, McGregor said that his aunt was not a victim of the infectious disease and died due to another medical issue.

McGregor’s native country of Ireland has been hit by the outbreak, with almost 700 confirmed cases and three deaths. Authorities have urged people to stay at home and announced the closure of schools, universities, gyms, and other public places.

"Everyone should stay vigilant, isolated and safe with their families at home. People should not think for a second that it won’t affect them and put their guard down. Hand hygiene is key", McGregor recently said in an interview with the magazine Maxim.