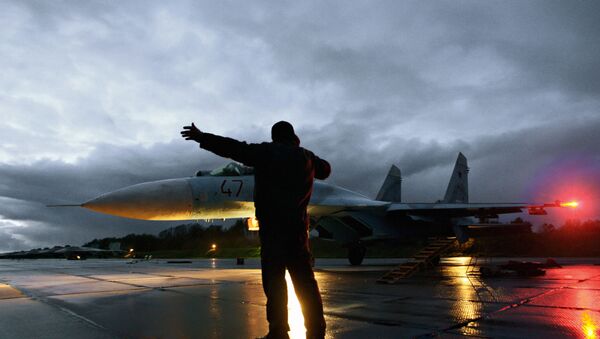 Oleg Burunov
All materialsWrite to the author
In the past few decades, a whole array of night-time military operations across the world has occurred at night; this is only natural because warplanes prefer to launch first strikes in the dark so as to unexpectedly hit targets without fearing retaliation from enemy anti-aircraft systems or fighter jets.

Blind flights, radar detection, and bombing of invisible objects remain an essential part of Russian pilots’ training when it comes to night flyovers. Here’s a look at the details.

Russian Aerospace Forces’ Major General Vladimir Popov explains that a pilot’s reaction to a sudden change of lighting from bright to dark is of paramount importance to night flights.

“The sooner [the pilot reacts to it] the better. […] My reaction time was four to five seconds. This is considered a good result”, Popov said, adding that during a check, an officer is typically tasked with spotting a silhouette of an airplane or a geometric figure in a dark room, seconds after he is dazzled by a flash.

In addition, pilots should be able to distinguish between red, yellow, and green, which will help them determine location with regard to other aircraft carrying aeronautical lights, carry out a touch-down with the help of runaway lights, and navigate by light signals from high masts and spires.

As far as night flights are concerned, officers must also have a good vestibular apparatus, in order to literally blindly determine the position of a plane in the air in relation to the horizon. According to aviation veterans, this “sixth sense” has been trained for years and then remains with a person forever.

Pilots only get the green light to conduct night flights after they learn to confidently fly during the day amid poor visibility weather conditions, such as dense clouds, snow, and rain.

Mass night flights of Russian civilian and military aircraft kicked off in the 1920-30s when special light landmarks were used for such missions.

This was followed by the deployment of radio equipment helping broadcast signals at a certain frequency, Popov goes on, adding that pilots tuned in to it through the so-called ARC, automatic radio compasses - and flew “in line with the direction of an arrow”.

“Nowadays, night flights are conducted with the help of radars, including infrared ones, or direction finders indicating the position of radio points and lighthouses. Finally, we have almost all aircraft and helicopters equipped with radio communication systems, which also simplifies orientation”.

Additionally, combat aircraft are actively using satellite-based global positioning systems, mainly American GPS and Russian GLONASS, which make it possible for the planes to follow the route rather accurately even at zero visibility.

Experts warn, however, that in the event of a full-scale war, these systems can be destroyed by enemy electronic warfare systems, meaning that pilots will have to have old fashioned ways to carry out night flights.

Pilots themselves insist that night sorties have many advantages in terms of tactics.

First and foremost, the night is the right time for an enemy to be taken by surprise, and secondly, a plane becomes an extremely difficult target for anti-aircraft and man-portable air defence systems. Thirdly, detecting an enemy warplane at short range is a tricky task for air defence fighter jets, something that has a significant demoralising impact on pilots. 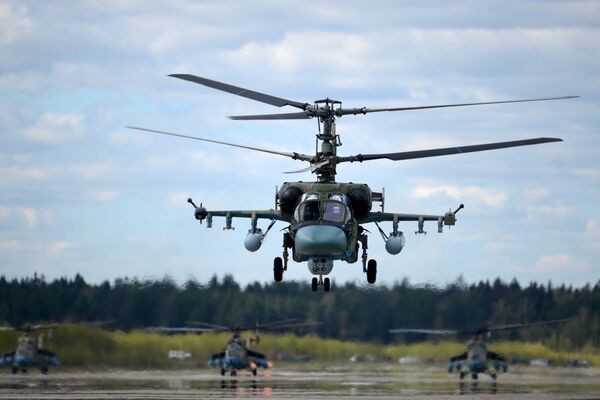 A Ka-52 Alligator attack helicopter during a rehearsal of the airshow for the Victory Day parade.
© Sputnik / Evgeny Biyatov
/
Go to the photo bank

In this regard, conducting night flights is not uncommon for a Russian Aerospace Forces group in Syria, where terrorist targets are also hit at night by advanced helicopters, including the Mi-35, the Mi-28, and the Ka-52.

The Russian Defence Ministry plans to use the experience of the Aerospace Forces night flights in Syria in a new training programme for pilots that is expected to be unveiled this fall.