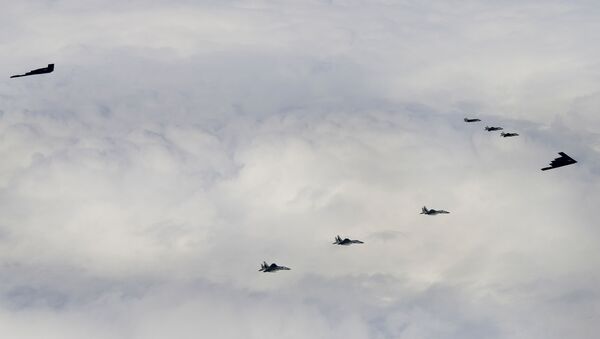 Earlier this week, the US Air Force teamed up with its Norwegian counterpart to carry out a first-of-its-kind joint training exercise amid NATO’s ongoing Icelandic Air Policing (IAP) operation.

The Barents Observer reported that the two US stealth bombers, accompanied by British F-15C Eagles, departed Royal Air Force (RAF) Fairford in Gloucestershire, England, to meet up with the Norwegian aircraft out of Naval Air Station Keflavik in Iceland.

“This was indeed a special moment,” Sigurd Tonning-Olsen, a spokesperson with the Norwegian Armed Forces, told the outlet in a phone interview. “The pilots were really excited.”

Tonning-Olsen detailed that the three F-35s were in the air for approximately one and a half hours total and conducted joint training with the B-2s for somewhere between 30 and 45 minutes of that time.

Four F-35s belonging to the Royal Norwegian Air Force have been stationed at Keflavik since February 19 to provide support to NATO’s IAP operation, which was launched in 2008 to provide surveillance and coverage of Iceland following the withdrawal of US forces from the country in 2006. Business Insider reported that some 130 Norwegian military and affiliated civilian personnel also arrived in Iceland last month during the deployment.

Norway’s F-35s are particularly unique because they come equipped with a drag chute system that assists in decelerating the aircraft in icy and windy conditions. Although the Norwegian F-35s achieved initial operational capability in November 2019, their February deployment to Iceland is the US-made aircraft’s first mission abroad.

“We have had stormy and snowy days here,” Tonning-Olsen told the Observer. “The F-35s have proven very good for this kind of winter climate.”

“Strategic bomber deployments to Europe provide theater familiarization for aircrew members and demonstrate US commitment to allies and partners,” the US Air Forces in Europe said in a March 9 news release prior to the joint training.

Earlier this month, two Russian Tu-142 anti-submarine aircraft were spotted over neutral waters in the Atlantic Ocean and the Barents, Norwegian and North Seas during a planned, 15-hour flight.

Footage posted by the Russian Ministry of Defense noted that the aircraft were escorted by Norwegian F-16s and RAF Eurofighter Typhoon fighter jets. The RAF detailed the event on social media, noting its Typhoon aircraft were launched as a “routine response to Russian aircraft approaching UK air space.”