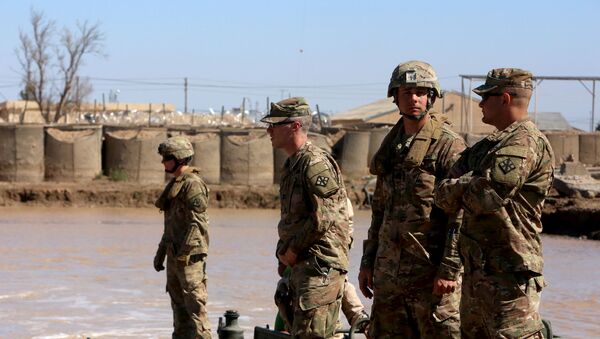 Oleg Burunov
All materialsWrite to the author
Last week, the US military confirmed that they had staged “defensive precision strikes” on weapons storage facilities of the Iraqi Shia paramilitary group Kataib Hezbollah in retaliation for the group’s previous attack on the Camp Taji military base in Iraq that killed at least two American servicemen.

NBC News has cited several unnamed US sources as saying on Thursday that the coronavirus pandemic prompted President Donald Trump last week to refrain from ordering a more aggressive response to an Iraqi paramilitary group’s recent attack on American troops in Iraq. The US sees Kataib Hezbollah as an Iranian proxy.

According to the sources, Trump told his senior national security advisers that such a retaliation could tarnish the US’s image now that Iran is grappling with COVID-19, which has already claimed the lives of more than 1,000 people in the Islamic Republic.

“The president has a pretty good sense of what type of action to take in response to these attacks”, one of the sources said, referring to the US military’s retaliatory steps as “proportional”.

The sources warned of Washington’s “proactive” actions aimed at preventing another attack, adding, “we recognise that there's an ongoing threat; we don't always have to be counterpunching”.

National security adviser Robert O'Brien, for his part, told Fox Business on Monday that the White House’s “eye is not off the ball” due to the COVID-19 pandemic.

“While we are focused on corona at home […] we are keeping an eye on those who would do us harm. If anyone thinks America is less determined, they are making a big mistake”, he pointed out.

“These strikes were defensive, proportional, and in direct response to the threat posed by Iranian-backed Shia militia groups (SMG) who continue to attack bases hosting OIR coalition forces”, the statement said.

The strike followed a Kataib Hezbollah firing a number of rockets at Camp Taji, an Iraqi base north of Baghdad where US and coalition troops are stationed. At least two US servicemen were killed and 14 other people wounded in the 11 March attack.

Kataib Hezbollah was commanded by Abu Mahdi al-Muhandis, who was killed, along with Iranian Major General Qasem Soleimani, in a 3 January US airstrike in Baghdad that was authorised by President Trump and which further added to the Washington-Tehran tensions. In February, the US State Department designated Ahmad al-Hamidawi, the new leader of Kataib Hezbollah, a global terrorist.

Tensions between the US and the Islamic Republic have been simmering since Trump unilaterally withdrew Washington from the 2015 Iran nuclear deal, also known as the Joint Comprehensive Plan of Action (JCPOA), in May 2018, also reinstating harsh economic sanctions on Tehran. Exactly a year later, Iran announced that it was suspending some of its obligations under the JCPOA.

000000
Popular comments
For now, US is in love with Corona

Barros
20 March 2020, 09:49 GMT6
000000
Covid-19 is a full fledged WMD and every fool on the planet can get his or her hands on it. It´s a good thing the US army has not stirred up any hard feelings anywhere on the planet lately, so that way they don't have to worry about a used handkerchief or two coming their way.