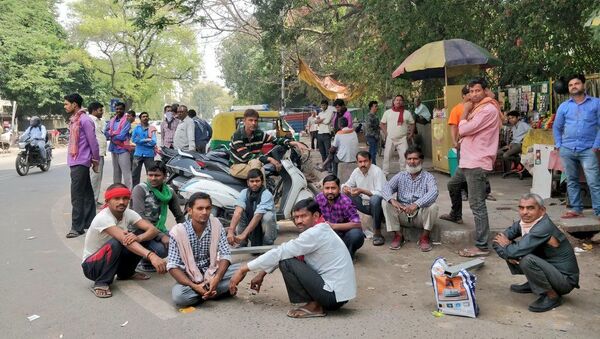 Shweta Sharma
Sputnik correspondent
All materialsWrite to the author
New Delhi (Sputnik): Millions of lives have come to a grinding halt as schools, offices, gyms, along with cultural and social centres are shut in countries across globe affected by the coronavirus outbreak. The lockdown has massively impacted daily wage earners in poverty-stricken countries.

Daily wage workers, mostly migrants from Uttar Pradesh and Bihar, in India’s national capital New Delhi have been hit the hardest by the coronavirus outbreak as they strive to make a hand-to-mouth living by doing menial jobs.

Each day is a new day for the workers as they stand in groups at city junctions in the hope of getting hired by contractors on a per-day basis. However, for the past one week, labourers who used to work six days a week are now waiting to get a job.

Due to the fear of the pandemic's spread, people have stopped giving them work. 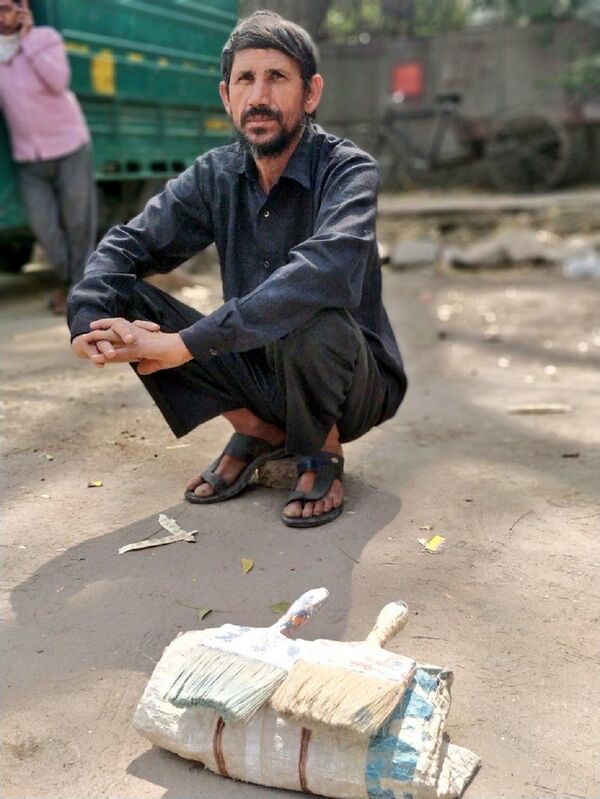 Aslam from Uttar Pradesh’s Muradabad district, who has been restlessly sitting by the roadside with his tool kit, says he has not earned a single penny over the past one month. The biggest concern for daily wage earners like Aslam is feeding their family and providing education to their kids.

“People treat us like untouchables ever since the outbreak. I earn my living by painting houses but people don’t want us to enter their homes now. I do not know how I will feed my kids tomorrow after no earnings today”, says Aslam while waiting to get a day’s job in South Delhi.

Migrant labourer Aslam, a painter from UP, says people do not allow them into houses due to coronavirus. Haven't got any work from last one month. #jantacurfew2020 #coronavirusindia pic.twitter.com/6xwnvq6DTi

Another labourer from the group, Abdul Salam from the state of Bihar, while expressing his fear of joblessness, says he doesn’t know if he would die of coronavirus or not, but he would surely die of either starvation or stress.

“Government should also think about poor labourers. The measures are important, we understand that, but where should we go?” asks Salam, who hasn’t had any work for five days.

Loss Due to a Day’s Curfew

The workers unanimously say that Prime Minister Narendra Modi’s announcement of a “Janta Curfew (Public Curfew)” on 22 March and appeal for 14 days of self-quarantine will further maximise their suffering and cripple their livelihood.

A daily wage worker in India earns a minimum of INR 500 (approx. $7) a day, but with the current lockdown, they haven’t earned even this much in a week.

Mohammad Sayeed, a 60-year-old who has six mouths to feed, feels that a day’s curfew might not help the problem, but would definitely affect him, as he has only worked for 10 days this month.

“We will stay at home as told by the government but we will be highly impacted by losing a day of work on Sunday as we get most of the work on the weekend”, said another worker.

Hardest-hit by coronavirus, migrant labourer say they will die of starvation if not virus.
Watch how lockdown is impacting the daily wagers in Delhi. pic.twitter.com/Jt2WKhyJG7

The government in its directions has also asked kids under 10 years of age and elders of more than 70 years of age to stay indoors as they are more vulnerable to the spread of the virus.

Meanwhile, 80-year-old flower stall owner Maheshwar, who sits outside a temple in Delhi’s Malviya Nagar, is helpless. He says, “I cannot stay at home, I have to earn the living for my family. Who is there to feed us? We are on our own”.

Not Eligible for Gov’t Help

To minimise the economic loss due to the spread of the virus, which has affected over 200 people in the country so far, the government has set up an Economic Response Task Force to support businesses that have been affected due to the shutdown. However, the said response team would not be catering to daily wage workers like Aslam and Maheshwar.

Nevertheless, some states like Uttar Pradesh and Kerala have announced monetary help to casual/unskilled labourers, but a very small section of such workers is present in these states.

The daily wagers operate in the informal economy, hence are not entitled to any benefits. It is the most prevalent form of employment in India, with around total of 195 million wage employees; 62 percent (i.e. 121 million) are employed as casual workers and earn on day-to-day basis.