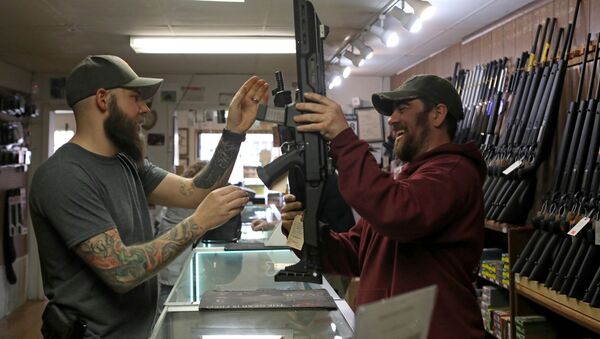 Ekaterina Blinova
All materialsWrite to the author
The coronavirus outbreak has not only led to empty shelves in US grocery stores but has also boosted gun and ammo sales across the country. American observers have given explanations about the possible roots of the trend and its potential consequences.

On 17 March, an online ammunition store Ammo.com reported an unprecedented increase in bullet sales starting in February 2020 saying that it "directly correlates" with the rise of COVID-19 and its spread across the country.

Ammo is not the only store spotting a massive spike in firearms demand: Adventure Outdoors has signalled that its sales are up 400% so far this year with shotguns, AR-15 semi-automatic rifles, and 9mm handguns being hot sellers. Tactical gear retailer Bulletproof Zone has said its sales had leaped 100%, while an arms shop owner in Petaluma, California, revealed in an interview with KTVU FOX 2 that many buyers are acquiring guns for the first time.

One might wonder as to why US citizens are stockpiling weapons. On the other hand, the trend falls into the pattern of the global panic buying amid the pandemic which is driven by what Jay L. Zagorsky, a senior lecturer at the Questrom School of Business, calls "zero risk bias".

However, when it comes to guns the situation appears to be more complicated.

According to Ethan Ralph, founder of a conservative website, The Ralph Retort, deems that "the big concern" of the virus-driven gun buyers "is possible lawlessness breaking out and society breaking down". He notes that there's nothing "nonsensical" in the trend and though he is not stocking up guns and bullets a lot of his friends are.

"When you see some of the headlines about food shortages and major disruptions that could possibly last into next year, I think this is the natural response from some people", he says. "I think the concerns are certainly justified, although I am not stockpiling weapons myself. But the worry is that when people run out of food and money, they might try to take someone else's, so I see the other side of it".

The conservative blogger does not think that "a huge run on guns and ammo is going to calm things down", however what's going on is "a natural reaction to the things you see coming from our media and politicians".

"I do think that we should be asking ourselves how do we calm down tensions in general", he says. "You can definitely feel the uneasiness in the air". 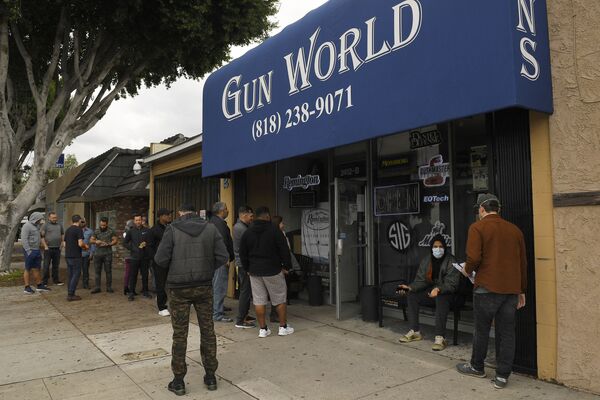 Pamela Geller, an American political activist, blogger and editor-in-chief of the Geller Report, suggests the surge in gun sales "is a perfectly reasonable response in a time of global uncertainty and open calls by Leftists for violence against their political opponents".

"Those same Leftists may try to take advantage of the prevailing confusion to brutalize patriotic Americans", she says. "There is no cause for concern in law-abiding patriots being able to defend themselves, and may even have a deterrent effect among Leftists who are less unhinged than most".

Last month, independent American journalist Andy Ngo drew attention to violent attacks against US civilians, police, and even other left-wing groups by radical left antifa groups in his Twitter posts.

.@PortlandPolice tell the antifa mob to stop throwing projectiles at them. Antifa respond by doing more of it. pic.twitter.com/POj4CNLK6x

​There has been repeated reports about clashes between right-wing and anti-right-wing groups in Portland, which prompted Donald Trump to tweet in August that he was giving "major consideration" to naming antifa an "organisation of terror".

​Meanwhile, in July 2019, Willem Van Spronsen, a 69-year old self-described "antifa", attacked a US Immigration and Customs Enforcement (ICE) detention centre in Tacoma, Washington while armed with an AR-15 assault weapon. Four Tacoma police officers shot and killed Van Spronsen, who earlier encouraged his followers to arm and bring about a revolution in the US in his manifesto. The assailant was reportedly up in arms about the federal government's immigration policies and deportation practices.

However, there is no statistic saying to which side of the political spectrum weapons buyers belong. 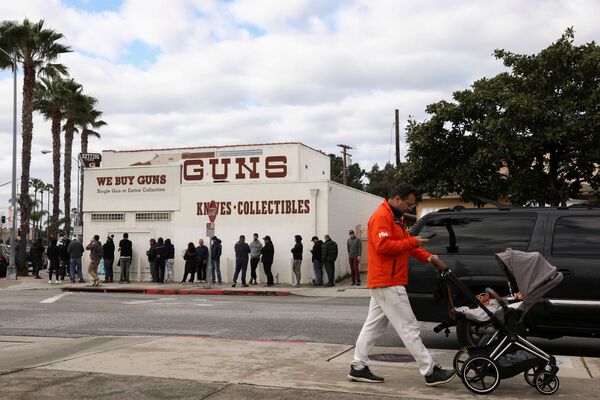 A pedestrian pushes a stroller as people wait in line outside to buy supplies at the Martin B. Retting, Inc. gun store amid fears of the global growth of coronavirus cases, in Culver City, California, U.S. March 15, 2020
© REUTERS / PATRICK T. FALLON

Independent political journalist Max Parry believes it's not the country's simmering political divisions that are forcing people to stockpile guns but is "a tremendous underlying fear that the government will impose martial law which could potentially threaten the safety and civil liberties than any health threat from the virus".

"It's natural reaction considering Congress is already trying to use the pandemic to ram through an extension of the USA Patriot Act and they are enacting completely unnecessary measures such as calling in the National Guard to impose 'containment areas' like we saw in New Rochelle, New York. They are also establishing FEMA 'quarantine' camps in US military facilities such as Fort Hamilton in New York", the journalist points out.

Adding to the confusion, CNN's Jim Sciutto tweeted on 16 March that "there are active discussions within the Trump administration to encourage a possible 'curfew' across the nation".

New: There are active discussions within the Trump administration to encourage a possible “curfew” across the nation in which non-essential businesses would have to close by a certain time each night. - @CNN reporting

​The claim was immediately busted by the White House, who stated that "rumours of a national lockdown or national quarantine recently shared via text message are fake".

✅Official, up-to-date guidance on #COVID19 is available from @CDCgov and at https://t.co/XnPrVeij1D.

❌Rumors of a national lockdown or national quarantine recently shared via text message are FAKE.

​According to Parry, "people have been given little guarantee that the state is going to step in and provide a social safety net to help them through the crisis", while, on the other hand, the government "has already provided trillions to bailout shareholders and various impacted industries".

"With such a message being set that the working class is not a priority for the US government, of course such trepidation is going to lead to a surge in weapons and ammunition sales", he says. "There is a tendency to demonise people and US gun culture, which in many respects is a product of the Cold War, while little has been discussed by either the political establishment or mainstream media about the underpinning to such a reaction, which of course is social inequality and the complete militarisation of American society".

He warns that the consequences of stocking up firearms could be dire amid the unprecedented economic recession "unless the federal government is properly utilised to provide social services, not expanding the police state with drills and deploying militarised police and using it as an excuse to spy on communications, emails, and phone calls of citizens".