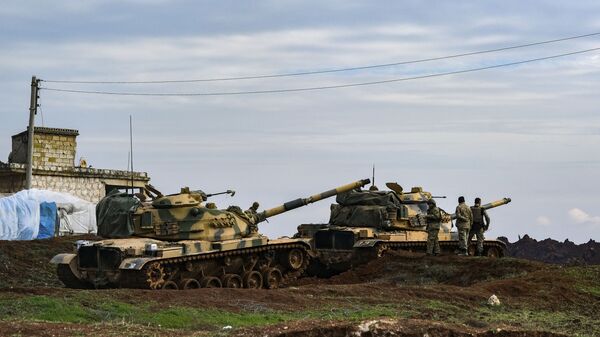 Oleg Burunov
All materialsWrite to the author
On 5 March, Moscow and Ankara clinched a ceasefire deal to stop an ongoing escalation between Turkish and Syrian forces in Idlib Province, and to establish joint military patrols in the area.

Russian Foreign Ministry spokeswoman Maria Zakharova told reporters on Friday that the US, which is frustrated over the Moscow-Ankara accord on the Idlib settlement, uses any pretext to promote anti-Russian hysteria.

She said that the Ministry has paid attention to “the intensification of contacts between American politicians and the quasi-humanitarian organisation White Helmets operating in Syria”.

“Such contacts usually end up with big problems in the region in the form of provocations and provocative actions. On 17 March, US Deputy Secretary of State Stephen Biegun met the White Helmets leader despite restrictions on contacts with foreigners introduced by the State Department in connection with the spread of the coronavirus", Zakharova said.

She also recalled that on 11 March, the White Helmets leader delivered a speech in the US Senate, in what was preceded by the group’s representatives meeting the US Special Representative for Syria near the Turkish-Syrian border.

According to her, these meetings took place against the backdrop of Washington’s new anti-Russian information campaign over the situation in the Idlib de-escalation zone.

“Of course, it is surprising that the White Helmets, which position themselves exclusively as a humanitarian organisation, are again at the centre of the West’s information manipulations that are aimed at distorting the real situation in Idlib […]. It seems that ​​the possible implementation of the Russian-Turkish agreements, and the very idea of ​​the Idlib de-escalation zone, causes such irritation in Washington that they are ready to use any excuse to unleash anti-Russian hysteria and undermine Syrian political settlement”, Zakharova emphasised.

The statement comes after Russian President Vladimir Putin and his Turkish counterpart Recep Tayyip Erdogan signed an agreement on 5 March stipulating the re-establishment of a ceasefire regime in Syria’s Idlib Province and the organisation of joint patrols on the M4 and M5 highways in the area. Ankara also pledged to deploy more troops to the region, while ensuring that they strictly stay within established observation posts in the province.

The agreement was clinched after local terrorist groups intensified attacks against the Syrian Army last month, forcing it to respond in kind. On 27 February, Damascus forces shelled Turkish troops as they were returning the terrorists' fire, killing 33 servicemen, who, according to Russia, were not supposed to be in the theatre of operation.

Ankara pledged to retaliate for the deaths of its soldiers by launching an offensive against the Syrian Army dubbed Operation Spring Shield. The attacks reportedly resulted in the deaths of dozens of Syrian servicemen.

As far as the White Helmets are concerned, the group has been repeatedly tracked operating side by side with militants in Syria, including those from Hayat Tahrir al-Sham*, and also repeatedly accused of staging fake chemical weapons attacks in the country. This included the 2018 false chemical attack in Syria's Douma, which the Organisation for the Prohibition of Chemical Weapons (OPCW) blamed on the Syrian government.

Damascus insists that the Douma attack was staged by the White Helmets and used to justify the subsequent airstrikes on the Syrian forces by the US, the UK, and France.

*Hayat Tahrir al-Sham, a terrorist group banned in Russia and a spate of other countries