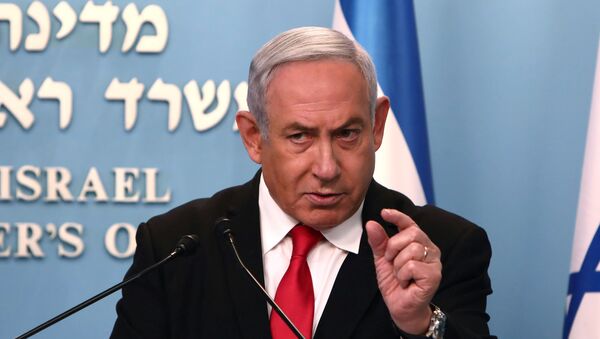 This week, Israeli Prime Minister Benjamin Netanyahu rolled out new legislation calling for the tracking of those confirmed to be infected with the COVID-19 novel coronavirus. As the leader faces several corruption-related charges, one expert tells Sputnik this new law is just the start of Netanyahu's attempt to strongarm the Israeli government.

The prime minister announced via news release on Tuesday that the Israeli government would begin tracking those confirmed to be infected with the novel coronavirus.

“We will dramatically increase the ability to locate and quarantine those who have been infected,” Netanyahu’s March 17 release read. “Today, we started using digital technology to locate people who have been in contact with those stricken by the Corona.”

Mitchell Plitnick, political analyst and former vice president at the Foundation for Middle East Peace, joined Radio Sputnik’s Political Misfits to discuss the Israeli’s government tracking of COVID-19-infected citizens and provide his commentary regarding how the pandemic is protecting the embattled prime minister amid his corruption cases.

“Not only is this surveillance through the cell phones just happening, it’s happening with no supervision,” Plitnick explained to hosts Bob Schlehuber and Jamarl Thomas “The courts are not there, the parliament is not there to supervise this - so it’s just going on with no real recourse.”

He asserted that this act by the government is being carried out by Netanyahu as a way for him to maintain power for “as long as possible” and “avoid indictment for fraud and breach of public trust.”

According to the political analyst, individuals attempted to protest the matter in Jerusalem on Thursday, but Israeli police put a stop to the demonstration in a nonviolent manner.

“It was very clear that they didn’t want this going on,” Plitnick asserted.

Al Jazeera reported that hundreds of demonstrators had gathered outside of parliament on March 19 to protest Netanyahu’s government, carrying banners that read “No to dictatorship” and “Democracy in danger.” Demonstrators also bore a sign that called the Israeli leader the “crime minister.”

"No one is above the law or above public health orders released by the ministry of health," Israeli police said, according to the outlet, pushing back against assertions that authorities were operating to protect Netanyahu’s name.

Plitnick said that several of his colleagues, whom he described as “mainstream analysts,” have been referring to the prime minister’s recent actions in Israel as a “coup.”

“That coup is going to go much, much further than just monitoring people’s cell phones,” he warned.