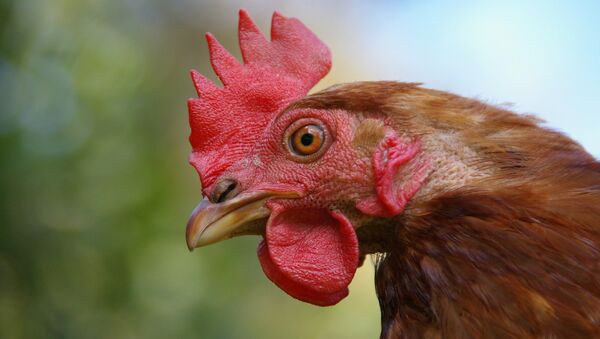 New Delhi (Sputnik): Mohammad Wasim, a meat shop owner in Uttar Pradesh state’s Noida city, sounded worried because the outbreak of the coronavirus pandemic has pushed many meat-eaters to switch to green vegetables in India.

Poultry farms in parts of India are struggling to recover the cost of breeding chickens at a time when infections like the coronavirus and swine flu are spreading in the country.

The plight of meat vendors entered the limelight on Thursday when media reported that nearly 5,000-6,000 hens had been buried alive in a single huge pit in Bulandshaher town of Uttar Pradesh state. Videos from the poultry farm that took the step were making the rounds on social networking platforms.

5000 chicks were buried alive by a poultry firm in Bulandshahar after rampant rumours amid #CoronavirusOutbreak adversely affected sales of chicken. Prices have nosedived to as low as Rs 30/kg in retail market at several places. pic.twitter.com/Uw4GfNUnCh

​​“Out of our stock, only 30 percent has been sold in the last couple of weeks. The situation is bad. People are scared to eat meat thinking they could get infected because of the virus. We have stopped purchasing hens from the wholesale market as of now”, Wasim told Sputnik.

Videos of a similar incident where hens were tucked into a grave in Karnataka also surfaced on social networking platforms earlier this week. Several poultry farms in the states of Madhya Pradesh, West Bengal, and Uttar Pradesh have been forced to take such drastic steps in order to cut down on their rearing costs.

“The Hajipur Murga Mandi at Delhi, from where retailers like us buy hens alive for our shops had dropped the price per hen to as low as INR 35 ($0.47). Usually, the cost of a live hen is measured according to their weight. The charges per kilogram are between INR 85-90 ($1.14-$1.27). People who are still eating meat are preferring goat over hen”, Wasim added.

​Netizens are addressing the subject of the poultry business suffering financially due  to the coronavirus on Twitter, calling the situation serious.

The effect of covid-19 is getting worse day by day. We got a formal call to shutdown our poultry business for time being. Buried alive 20k birds as of today. Don't know where this is going to end but it's going to be a huge impact on economy and livelihood.

​Restaurant owners are struggling to bring in profits now that the sales of highly demanded non-vegetarian dishes are not being ordered anymore in the country.

“Not more than two or three orders we are getting nowadays are for meat-based dishes because of the virus and diseases. We are also not bringing down the prices of the non-vegetarian dishes because then people would think we are serving unused old stock and it could tarnish our reputation in the market. We are incurring losses on a daily basis”, said Ram Avtaar, the owner of a restaurant called Desi Rasoi in the National Capital Region (NCR).

According to reports, the outbreak of the coronavirus, which originated in China’s Wuhan city, is linked to an unsupervised animal market that sold exotic meat from animals including bats and snakes.

The virus, which has marched into several parts of the world, has infected over 190,000 people globally and caused the deaths of more than 8,000.

In India, 148 cases of the virus have been recorded by the Ministry of Health and Family Welfare, along with three deaths in the Karnataka, Delhi, and Maharashtra regions.

The novel coronavirus, which has been found to attack the respiratory system of the human body, has been declared a disaster by the Indian government.

Offices, schools, colleges, worship places, and other public spots in India have been shut for the time being as a precautionary measure to stop the spread of the virus.