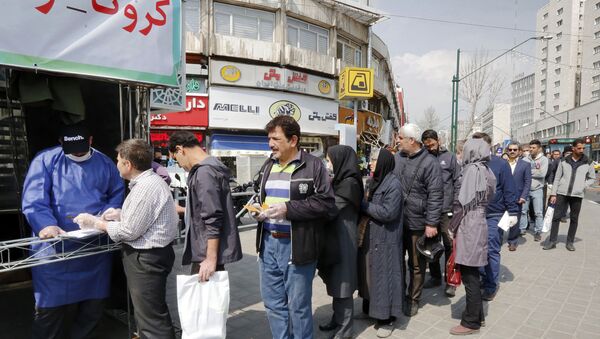 © AFP 2021 / STRINGER
Subscribe
On Tuesday, the US added even more sanctions on Iran, which is in the midst of a severe COVID-19 outbreak. US sanctions were already killing the sick in Iran even before the pandemic, but one Iranian scholar told Sputnik the bigger problem is regional poverty, which is also largely Washington’s doing.

US Secretary of State Mike Pompeo announced on Tuesday the imposition of sanctions against nine entities for doing business with three people in Iran’s oil industry, who were also sanctioned. The same day, the US Commerce Department added 18 corporations and five Iranian scientists to its “Entity List,” which bars Americans from doing business with them without a special license.

Meanwhile, there are more than 17,000 cases of the COVID-19 novel coronavirus in Iran, where more than 1,100 people have died, according to data compiled by Johns Hopkins University; both statistics are the world’s third-highest, after China and Italy. Tehran has urged the US as well as the UN, International Monetary Fund and other world institutions to lower economic sanctions and send emergency aid, but Washington has remained intransigent, refusing help unless Iran releases jailed Americans.

Mohammad Marandi, an expert on American studies and postcolonial literature who teaches at the University of Tehran, told Radio Sputnik’s Loud and Clear Wednesday that Iranians feel like Americans want as many of them as possible to die in order to achieve their political goals.

“In the past, this maximum pressure campaign has killed Iranian citizens who were in need of certain medicines, and those medicines were not available because Iran can’t use the global banking system, and, therefore, sometimes the medicines arrive late or the materials needed to produce medicines in Iran arrive late, and thus causing the loss of life,” he told hosts John Kiriakou and Brian Becker.

“The sanctions are an attempt to intensify the pressure at a time when Iran is facing a major challenge through the coronavirus,” Marandi said. “The belief here is that the Americans want the coronavirus to spread as much as possible in Iran and to make the health care system and the hospitals in the country overwhelmed by patients, in order to maximize suffering so that they can get concessions from Iran.”

“Beyond being barbaric and inhumane, one of the major issues that the Americans are not even taking into consideration is that this virus does not recognize borders, and if Iran fails in its fight against the virus, then that is very dangerous for the whole of the international community,” Marandi noted.

The scholar noted that the sanctions are interrupting key parts of the supply chain for locally produced medicines and equipment.

“China, so far, has given more aid to Iran than any other country. During the outbreak of the coronavirus in China, despite the sanctions, Iran was among the first countries to provide aid to China, and China returned the favor - in a big way, I must say - and that has helped,” Marandi said. However, he noted “there is definitely a shortage, there will continue to be a shortage, and Iranians believe the Americans are using this to their advantage. The Americans want to see as many Iranians killed as possible and as many Iranians infected as possible in order to undermine Iran’s sovereignty.”

“For Iranians, this is a crime against humanity, and it’s something almost unprecedented in human history,” Marandi said.

There is, however, at least one similar situation: in the early 1990s, amid the collapse of the Soviet Union and the onset of severe natural disasters that crushed North Korea’s ability to feed itself, Washington withheld food aid as a weapon to extract the coercive Agreed Framework from Pyongyang, forcing a halt to its nuclear program. Upwards of 3 million Koreans had died by 1998 from starvation or complications caused by famine.

Marandi blasted Western media as “extraordinarily immoral” for trying to project an image of chaos and fear inside Iran to the rest of the globe. He identified it as “part of this broader campaign to hurt ordinary Iranians.”

“Iran has been quite calm. We have not seen the sort of scenes that we’ve seen in Europe and the United States, where people rush to shop and take away whatever is available. The local supermarkets that are near my house have everything that I need,” he said, noting that shortages tend to be isolated and short-lived.

“The problem is with the hospitals: the hospitals need a lot of equipment and a lot of medicines and a large number of test kits in order to be able to deal with the current situation,” he noted. Last week, Iranian Foreign Minister Mohammad Javad Zarif tweeted a list of those needs, including respirators that can mean the difference between life and death for sufferers of the virus, which attacks the lungs and respiratory system.

​“It is a country of 85 million people. Many of our neighboring countries are broken because of US invasions,” Marandi said. He noted that Iranian officials believe the region’s infection rate is much higher than governments are announcing, because many of them don’t have strong enough health care systems to adequately and accurately detect all COVID-19 cases.

“So not only is Iran struggling because of US sanctions … but also because of the general poverty that exists in the region, that has created an even greater challenge for this country,” he said.

000000
Popular comments
I was correct , this is another war strategy created by the US . I give myself top marks , make me a General cleaning shit barracks on US military basses .

Richard Martin
19 March 2020, 01:56 GMT4
000000
While the title of the article says it all the details are alarming, but not unexpected. great to see China help as a payback, just like Iran had helped China in the early days of their pandemic. The phrase above barbaric and inhumane accurately defines the situation. With the mention of the US starving 3 million Koreans that too is done without a conscience, that is a psychopath in it's purest form.
Foxylady
19 March 2020, 02:10 GMT5
000000
Newsfeed
0
New firstOld first
loader
LIVE
Заголовок открываемого материала
Access to the chat has been blocked for violating the rules . You will be able to participate again through:∞. If you do not agree with the blocking, please use the feedback form
The discussion is closed. You can participate in the discussion within 24 hours after the publication of the article.
To participate in the discussion
log in or register
loader
Chats
Заголовок открываемого материала
Worldwide
InternationalEnglishEnglishMundoEspañolSpanish
Europe
DeutschlandDeutschGermanFranceFrançaisFrenchΕλλάδαΕλληνικάGreekItaliaItalianoItalianČeská republikaČeštinaCzechPolskaPolskiPolishСрбиjаСрпскиSerbianLatvijaLatviešuLatvianLietuvaLietuviųLithuanianMoldovaMoldoveneascăMoldavianБеларусьБеларускiBelarusian
Transcaucasia
ԱրմենիաՀայերենArmenianАҧсныАҧсышәалаAbkhazХуссар ИрыстонИронауОssetianსაქართველოქართულიGeorgianAzərbaycanАzərbaycancaAzerbaijani
Middle East
Sputnik عربيArabicArabicTürkiyeTürkçeTurkishSputnik ایرانPersianPersianSputnik افغانستانDariDari
Central Asia
ҚазақстанҚазақ тіліKazakhКыргызстанКыргызчаKyrgyzOʻzbekistonЎзбекчаUzbekТоҷикистонТоҷикӣTajik
East & Southeast Asia
Việt NamTiếng ViệtVietnamese日本日本語Japanese中国中文Chinese
South America
BrasilPortuguêsPortuguese
NewsfeedBreaking
05:42 GMTBoJo Faces Tory Pressure Over Alleged Illicit No 10 Christmas Bash, Plan ‘B’ COVID Restrictions
05:24 GMT'God Giving a F***': Swedish Transport Administration Mural With Female Genitalia Sparks Outrage
05:05 GMTPentagon Refuses to Comment on Possible Anti-Iranian Drills With Israel
04:48 GMTWatch Coast Guard Diver Pull Body From Car Stuck at Brink of Niagara Falls
04:21 GMTMagnitude 6.0 Earthquake Strikes Off Southwestern Coast of Japan, Seismologists Say
04:12 GMTElon Musk Warns About Lots of 'Accounting Trickery' in Biden’s Build Back Better
03:43 GMTPro-Choice Coalition Unveils Plan to Expand Abortion Access in California
03:42 GMTHouse Dem Leaders Mulling Response to Boebert-Omar Feud as 'Squad' Wants Blood - Report
03:37 GMT‘Let’s Go Brandon’ Boat-Winner Disqualified From Competition For ‘Overt Political Message’ - Report
02:45 GMTGOP Lawmaker Urges Going ‘Beyond Political Labels’ to Address Border Crisis, Suggests His Own Plan
01:53 GMTPence Goes to New Hampshire to Support GOP, Stirring up Rumors of Running in 2024 - Report
01:02 GMTHouthis Claim ‘Major Collapse’ of Coalition Forces Defending Ma’rib, Predict City’s Capture in Days
00:36 GMTUS House Passes Bill to Ban Imports From China's Xinjiang
00:35 GMTMutations May Make COVID-19 Boosters as Routine as Flu Shots - Report
00:14 GMTTrump Ex-Chief of Staff Facing Contempt Charge Sues US House Speaker Pelosi - Reports
00:10 GMT'Serial Liar': Jussie Smollett Accused of Lying Under Oath as Jury Ends First Day of Deliberations
YesterdayTaiwan Urgently Needs to Develop Asymmetric Defense Capabilities to Deter China, Pentagon Says
YesterdayWatch: Hillary Clinton Weeps as She Reads Her 2016 Victory Speech That Never Happened
YesterdayOmicron Strain to Hinder World Economy Revival, WTO Director-General Says
YesterdayMBS’ Pre-GCC Summit Tour Takes Him to Doha for First Time Since Lifting Qatar Boycott