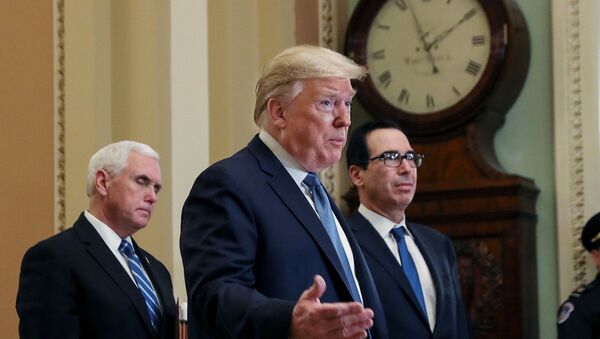 US Treasury Secretary Steve Mnuchin announced that the Trump administration may send checks to Americans “in the next two weeks” to fight the economic fallout of the COVID-19 novel coronavirus. Though the amount is unknown, an economics expert tells Sputnik that the government has already failed on the matter.

“We’re looking at sending checks to Americans immediately,” Mnuchin said during the Tuesday press briefing at the White House. “Americans need cash now; the president wants to get [them] cash now. I mean now - in the next few weeks.”

"We're looking at sending checks to Americans immediately - I mean now, in the next 2 weeks"

Richard Wolff, a professor of economics emeritus at University of Massachusetts Amherst and founder of the organization “Democracy at Work,” joined Radio Sputnik’s Loud and Clear on Tuesday to discuss the government’s proposed response to the novel coronavirus and where the economy may be heading as a result of the pandemic.

“We are now seeing the private sector shut down. Millions of Americans are losing their jobs, losing their incomes, [and] because of that they are unable to spend money that they are not earning - which is depriving businesses of the incomes [and] leading them, in turn, to lay off people,” he explained.

Wolff highlighted that while an economy that functions under capitalism has become used to economic downturns every four to seven years for hundreds of years, those periods usually occur over a period of months, rather than current economic downturn, which has precipitated in a matter of days as response to the COVID-19 pandemic.

“What we’re seeing is a several-months downturn happening in a several-days period. We have no precedents for that. Even in the depths of the [Great] Depression it didn’t go this fast, and the government is coming in - as it always has - with too little, too late,” he asserted.

Senator Mitt Romney (R-UT) received mixed reactions from Americans via social media earlier this week when he, along with Rep. Tulsi Gabbard (D-HI), proposed that every American adult receive immediate, direct assistance from the federal government in the form of a $1,000 check.

“Every American adult should immediately receive $1,000 to help ensure families and workers can meet their short-term obligations and increase spending in the economy.”

“What planet do they live on? A thousand dollars will not solve this problem. Only a person out of touch with the real life of the American people would make such a preposterous proposal,” Wolff asserted.

To be fair, Senator Kamala Harris (D-CA) received much greater backlash on Tuesday when she announced her LIFT Act “to give working families up to $500 a month.”

Let me be clear—I wrote the LIFT Act in 2018 because I believe we have always had a duty to help working families. My bill provides up to $500 not once, but every. single. month.

During this crisis, we must do much more. I'm working to shape a robust new bill to help families.

It did not take long for netizens to call out the “up to” qualifier of her relief proposal, and her attempt to clean up her proposal appeared to do little to lessen the admonishments thrown her way.

The average rent for an apartment in neoliberal Top Cop Kamala Harris' San Francisco, California, where she is a senator, is $2000-$3000 a month

In CA or NY that's how much groceries costhttps://t.co/umnWlIKZ1U

“If you’re going to give people a large amount of money, you’ve got to do it tomorrow, and you’ve got to do it in the tens of thousands, which this government, being Republican, being conservative - and unfortunately that means a lot of Democrats - they don’t know how to think like this,” Wolff noted.

While it’s unclear where exactly the US economy will end up following the COVID-19 fallout, Wolff contended that the current situation certainly feels like a “dress rehearsal” for a depression that may morph into the real thing.