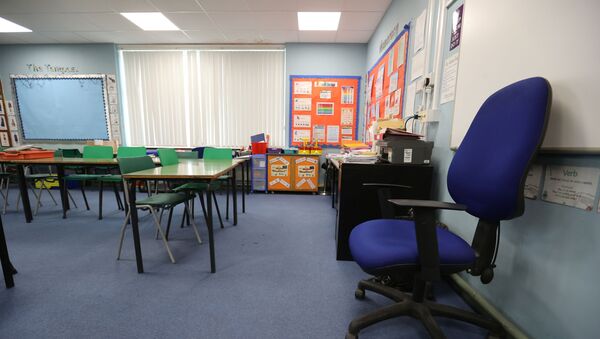 The British Government could be set to ramp up its measures to control the spread of the Coronavirus, amid mounting criticism of Prime Minister Boris Johnson’s handling of the situation. Schools and Universities have yet to be closed, despite Westminster’s advising the public to avoid large social gatherings.

But will it soon be necessary for the UK to be put under an Italy style lockdown?

Mike Swadling, School Governor and member of the Croydon constitutionalists, reflects on the subject.

Sputnik: What is your take on the British government’s coronavirus containment strategy?

Mike Swadling: We need to follow the advice of the medical experts, and they say that we need to take time before we close things down, we need to work together as a community, and I agree with that.

This is a massive threat and problem to our country and it is one of those few times perhaps in my life that I would think that we actually do trust the Government on this, and follow their advice

Regarding schools, I’m the governor of a couple of schools, and we are very much following government guidelines. Schools have to make their own individual circumstances, and one of the schools that I am involved with is special needs, and we are running slightly ahead of the Government’s views because of the nature of the children there. Another is a mainstream school, and we are very much staying in lockstep.

As a country, keeping things normal as much as possible I think is really important for frankly all of our sanities, and for the ongoing health of us all.

Sputnik: Will Europe ultimately suffer more economically from the coronavirus than China?

Mike Swadling: I’d hate to try and crystal ball gaze here, but I think that it’s important that the British Government tries to get things as back to normal as possible, as quickly as possible and that we aim for that bounce back.

The package announced yesterday by Chancellor of the Exchequer Rishi Sunak is a fantastic start, and it’s great to see them get a grip of this, and I think that fiscal stimulus is an appropriate response, whatever you think of the particular details of all of the moves; sometimes it’s just about setting the stall out and saying that you are going to do something.

I have to say that in Europe that looks less clear that that is the case. Italy seems to be in a quagmire, and it has been for a long time anyhow, President Macron in France has taken some action, but then they have almost a total shutdown in the country.

It’s very hard to see how the countries that have shut down are going to quickly rebuild, and I don’t see much-co-ordinated effort across the Eurozone, which is a real risk for those nations who are still pegged to the Deutsche mark, who really need to devalue their currency.

Sputnik: Can Brexit still go ahead as planned amid the coronavirus pandemic?

Mike Swadling: It’s a shame to see some people politicising this as an opportunity to delay something they don’t want in terms of Brexit, and it absolutely should proceed.

It’s not like you can’t have a video conference or an audio conference and agree on the way forward, there is nothing that has fundamentally changed about the fact that the UK has left the EU, and frankly the European’s completely inept response so far, suggests all the more reason for us to free ourselves quicker and sooner.

We’ve seen in France and Italy moves to nationalise companies, but that is not allowed under European rule, we need to get on with Brexit, they can negotiate via a phone call, it’s not that hard these days, and we should stick to the timetable that we have already had.