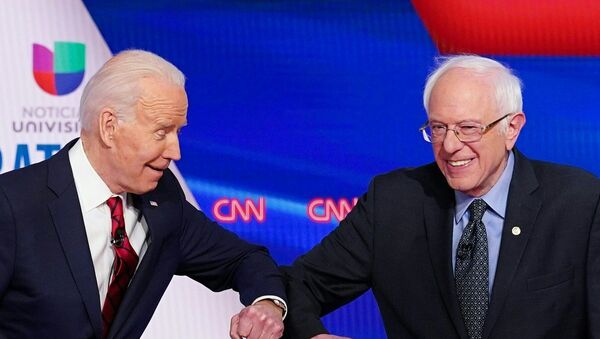 WASHINGTON (Sputnik) - Most voters in the Democratic primaries underway in the US states of Florida, Illinois, and Arizona amid the coronavirus outbreak trust former Vice President Joe Biden over Senator Bernie Sanders to handle a major crisis, an NBC News poll revealed.

According to a survey taken on Tuesday, 71 percent of voters in Florida, 64% in Illinois, and 63% in Arizona said they would favour Biden over Sanders in handling a crisis.

The three states are holding the first Democratic primaries since the coronavirus was declared a pandemic and a national emergency. Initially four states were to vote on Tuesday, but Ohio's primary was called off over health concerns.

Some 1,190 delegates are needed to win the party nomination on the first ballot. Biden so far has won 871 delegates to Sanders’ 719 after more than 25 primary contests, according to NBC.