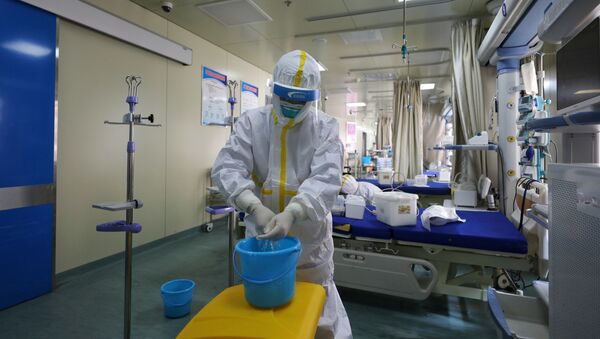 The Chinese government has rolled out new technology to curb the COVID-19 outbreak and is lending a hand to other struggling countries, while the US continues to take an “America first,” “profit-only” approach, web developer and technologist Chris Garaffa and software engineer Patricia Gorky told Sputnik Monday.

“China has rolled out cutting-edge technology in their fight against the COVID-19 virus, and we’re seeing that in Italy as well through the China-Italian partnership,” Gorky, who is also a technology and security analyst, told Loud & Clear hosts John Kiriakou and Brian Becker.

“China unveiled this 5G-connected robot that detects whether people are wearing masks and gives them a verbal reminder to put one on. We also have robots [in China] delivering packages while people are in quarantine. Usually when we talk about drones and robots, we’re talking about how the US government is really implementing technology for surveillance … but what China is showing is that actually, there’s an alternate way that this technology can actually be used to help people,” Gorky explained.

In China’s Shandong province, XAG’s drone fleets were deployed by a crop protection team on 28 January to disinfect a local community of over 300,000 square metres in less than four hours. pic.twitter.com/rKb1HkFhPg

​“China has created mobile hospital equipment, including this rolling incineration cabin that can dispose of hazardous waste. They’re 3D printing quarantine rooms. They created a thermometer that can detect abnormal body temperatures within 100-feet radius in less than one second. And they made that thermometer, they developed and produced that thermometer, in five days. And China notably has also developed these nucleic acid tests that can return results on COVID-19 within 15 minutes, and they are currently working on vaccines. And the Chinese President Xi Jinping said that China will strongly support the worst affected countries like Italy against the COVID-19 outbreak,” Gorky told Sputnik.

A recent article by the Wall Street Journal also reveals that health officials across Asia-Pacific are using even more technologies to combat the disease, including smartphone location tracking to monitor the movements of people suspected of carrying the virus as well as thermal goggles that can determine people’s temperatures.

It’s not just China that is using high-tech solutions to combat the virus. In South Korea, the government created a “Self-Quarantine Safety Protection” tracking app to monitor roughly 30,000 people who were ordered to stay home. Government case officers were alerted every time quarantined individuals left their homes.

‘The Only Country That Can Help Us Is China’

In addition, China sent teams of medical experts and supplies to both Italy and Spain last week after the European Union failed to step in and help the two European countries hit hardest by the pandemic. The aid included 700 pieces of equipment, such as monitors, ventilators and defibrillators. Chinese authorities have also sent medical experts to Iraq, Iran and Serbia. Iran, in particular, has been hit extremely hard by the pandemic, with almost 15,000 cases and 900 deaths as a result of the virus.

Last week, Italy’s permanent representative to the EU, Maurizio Massari, called out the European Union for turning a blind eye to Italy’s desperate pleas for help.

“Italy, the European country struck hardest by the coronavirus, has done everything it can to contain and manage the epidemic … Italy has already asked to activate the European Union Mechanism of Civil Protection for the supply of medical equipment for individual protection. But, unfortunately, not a single EU country responded to the commission’s call. Only China responded bilaterally. Certainly, this is not a good sign of European solidarity,” Massari stated.

Serbian President Aleksandar Vučić similarly blasted Brussels’ response and hailed Beijing’s, saying Monday, "European solidarity does not exist. That was a fairy tale. The only country that can help us in this hard situation is the People's Republic of China. For the rest of them, thanks for nothing."

A new world is emerging from this crisis.

Serbian President: "European solidarity does not exist. That was a fairy tale. The only country that can help us in this hard situation is the People's Republic of China. For the rest of them, thanks for nothing." pic.twitter.com/KUGqa1eNug

​China’s swift actions to help other countries hit by the virus are in stark contrast to the United States’ response or lack thereof, Gorky pointed out.

“The Chinese president has said that humanity is a community with a shared future and that only through unity and coordination can we tackle these various global risks and challenges. And I just want to contrast that with the US. The US government is trying to obtain the exclusive rights to a German-made vaccine, but only for the US. That's the ‘America First’ mentality. Cuba and China are sending doctors to Italy and Iraq, while the US has sent bombs,” Gorky pointed out.

Like China, Cuba has sent teams of doctors and medical supplies to countries struggling to contain the virus. Cuba has also manufactured 22 drugs that could be used to contain the outbreak. One of the drugs, known as Interferon B, has cured 1,500 coronavirus patients and is one of 30 drugs listed by the Chinese National Health Commission as suitable for treating respiratory illness. Cuba has sent Interferon B supplies to Italy, where it is also working with Chinese medical experts to contain the outbreak there.

According to Garaffa, the US should also be developing technologies to combat the virus. However, US President Donald Trump has instead been spreading falsehoods about Google building an information portal to help manage coronavirus treatment before Google even knew it was building such a website.

In an effort to appease Trump’s order, Google’s parent company Alphabet scrambled to set up a website for coronavirus diagnosis and treatment. The website was rolled out Monday to residents living in Santa Clara and San Mateo counties in California. However, it doesn’t seem to provide much useful information. If you answer “yes” to “Are you currently experiencing severe symptoms, such as severe cough, severe shortness of breath, severe fever, or other concerning symptoms?” you are redirected to the following message: “Based on your report of severe symptoms, in-person COVID-19 testing through this program is not the right fit.”

“We [the US] could also be using technology too - as they have in China, as they have in Italy - to spread information, to spread as much information as possible about where people should go, should not go, how to take care of yourself. What we’re seeing now is, companies are voluntarily doing things, but they should be mandated to do certain things,” Garaffa noted.

“Tech companies could in fact be using their resources to build nationwide lists of hot spots of all of these things, and they could also be using their physical infrastructures. Amazon, for example, should be delivering food to people who are quarantined. They have a massive, massive distribution network, so why isn’t that being used to deliver food, to deliver medication in some of the worst-hit areas?” Garaffa asked.

According to Gorky, the issue is not the US’ lack of technology or innovation.

“The issue is that this government - Republicans and Democrats - would rather put tens of millions of people at risk before they will pass universal healthcare [and guarantee] housing, quality education, the basic necessities of life which now only exist if they can turn a profit for the already obscenely wealthy. The COVID-19 crisis is really laying bare the inherent cruelty that exists within this system,” Gorky added.