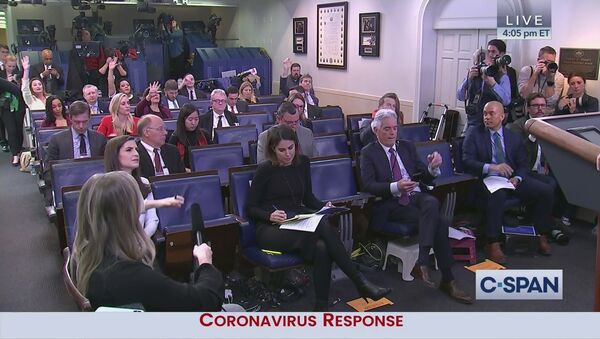 In an effort to combat the internal spread of the COVID-19 novel coronavirus among officials, the White House has implemented a number of precautionary measures and called for new mandatory checks.

The White House Correspondents Association (WHCA) revealed Monday that, in accordance with White House protocol adjustments amid the coronavirus crisis, reporters would be required to abide by a new seating arrangement in the press briefing room.

"We understand these restrictions are deeply disruptive to our members and their ability to do their jobs," WHCA President Jon Karl announced in a statement, as reported by The Hill. “But we are forced to take these steps to do our part to ensure that there is a healthy pool available to cover the president and inform the public during this critical time."

Members of the press quickly took to social media to reveal the new procedure.

At today’s White House press briefing, there will be far fewer journalists in the room. (This is only temporary until the Coronavirus situation improves). The @whca is working hard to maximize coverage while minimizing health risks. Thanks @stevenportnoy for the signs and pics. pic.twitter.com/VQFpQ4iQWx

The same tests were also administered to all personnel who arrived at the White House gates.

Today, temperature checks on the forehead in front of the entrance of the NorthWest Gate of the White House. William was also checked. Photo by William Moon pic.twitter.com/RHeJgIcC4a

"Out of an abundance of caution, temperature checks are now being performed on any individuals who are in close contact with the President and Vice President," White House Deputy Press Secretary Judd Deere said in a Saturday statement, reported CNBC.

The same day, the Office of the Press Secretary announced that US President Donald Trump had tested negative for the COVID-19 virus, despite suspicions otherwise after he came into contact with numerous individuals who were either exposed to or had tested positive for it.

These changes came alongside the Trump administration’s release of guidelines for a “15 Days to Slow the Spread” initiative that urges Americans to, among many things: work from home if possible, avoid social gatherings, practice good hygiene and avoid discretionary travel.

While the WHCA is taking these steps in an effort to protect individuals who visit the White House and keep the novel coronavirus from infecting US officials, the US Centers for Disease Control and Prevention states that social distancing requires one to maintain a distance of 6 feet (or 2 meters) from others when possible.

According to the Johns Hopkins University Center for Systems Science and Engineering, more than 4,400 COVID-19 cases have been confirmed in the US. As of the publication of this article, at least 78 individuals within the states have died from the contagious disease, and 17 have recovered.