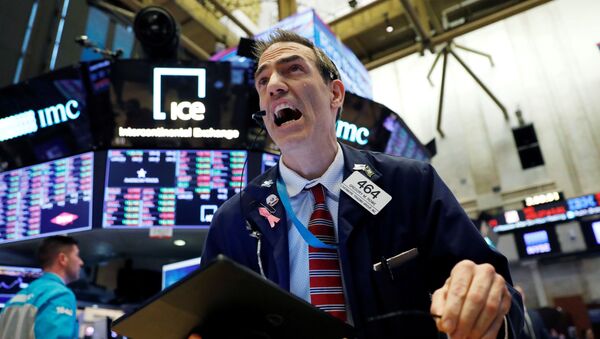 US stocks fell sharply on Monday as the Dow Jones Industrial Average index tumbled nearly 3,000 points despite the Federal Reserve’s latest attempt to ward off concerns of a possible COVID-19-induced economic downturn.

The Dow slid by 2,997.10 points, while the S&P 500 dropped by 324.89 points, declines which placed the indices more than 20% below record highs set in February. The Nasdaq Composite likewise fell by 970.28 points. Monday’s losses marked the continuation of the US’ first bear market in more than a decade.

Stocks plunged nearly 13% moments after US President Donald Trump indicated that the worst of the COVID-19 pandemic could last in the US until July or August. Trump also told reporters that the US economy “may be” heading toward a recession as a result of the COVID-19 pandemic. However, Trump later predicated that “once this virus is gone … you’re going to have a stock market like no one’s ever seen before.”

"The market will take care of itself," Trump later said after being informed of the closing figures.

Trading on the New York Stock Exchange on Monday was also halted for a 15-minute period for the third time in recent weeks. Circuit breakers were triggered moments after the opening bell when the S&P 500 index fell by more than 7%.

Stocks that made the biggest moves during the day’s trading included retailer Gap, which slid more than 24% after the company indicated it was going to slash operating hours in the US and Canada, according to CNBC.

No stranger to the COVID-19 pandemic’s clutches, airlines Delta, United, American Airlines and Alaska Air Group have continued to see losses. Prior to Monday’s closing, Airlines for America, a lobbying group representing several major US airlines, released a letter indicating that its clients urgently need $50 billion in grants and loans in order to get a handle on coronavirus-linked financial damages.

Hours before Monday’s opening on the trading floor, the US Federal Reserve over the weekend announced a series of new measures it would be enacting in an effort to help stabilize the slowing US economy.

Those measures include a second slash to interest rates, this time to near-zero levels; buying at least $700 billion in government and mortgage-backed securities; and interest rate cuts to short-term emergency loans, among other initiatives.

“The Fed blasted its monetary bazooka for sure,” Peter Boockvar, chief investment officer at Bleakley Advisory Group, told CNBC. “This better work, because I don’t know what they have left, and no amount of money raining from the sky will cure this virus. Only time and medicine will.”

While some financial experts have remained optimistic and indicated the bank’s decisions will help to cushion the US economy, not everyone is on board. Terence Wong, the chief executive of Singapore-based management firm Azure Capital, told the Wall Street Journal there’s not much more the US central bank can do to intervene.

“It’s basically using up all their ammunition within a three-week span,” Wong said. “There’s nothing left. They can’t use monetary loosening as part of their arsenal anymore.”

Prior to the late Sunday decision, the Federal Reserve had cut interest rates on March 3 and pumped $1.5 trillion into the bond market to ensure sufficient liquidity. The new measures are expected to remain in place until the US economy is able to recover from the coronavirus’s effects on financial markets.

Moments after the Federal Reserve made clear its economic intentions, Trump praised the bank’s decision during a Sunday news conference at the White House, telling reporters that “it makes me very happy.”

“I want to congratulate the Federal Reserve … they did it in one step … I think that people in the markets should be very thrilled,” he added.

At present, there have been nearly 180,000 confirmed COVID-19 cases worldwide and over 7,000 documented deaths, according to data collected by the Johns Hopkins Center for Systems Science and Engineering. Multiple governments, including those of Italy, Spain and France, have initiated countrywide shutdowns in an effort to cease the spread of the coronavirus.

Following in the US’ steps, Canada became the most recent country to ban foreign nationals from entering the country. The US’ northern neighbor has more than 370 confirmed COVID-19 cases. Trudeau noted that the ban, which will exclude Americans, will ultimately help to save Canadian lives.

In the US, where there have been over 4,000 confirmed cases and at least 69 deaths recorded, several states have ordered the closures of schools, bars and restaurants and imposed restrictions on the gatherings of more than 50 individuals.