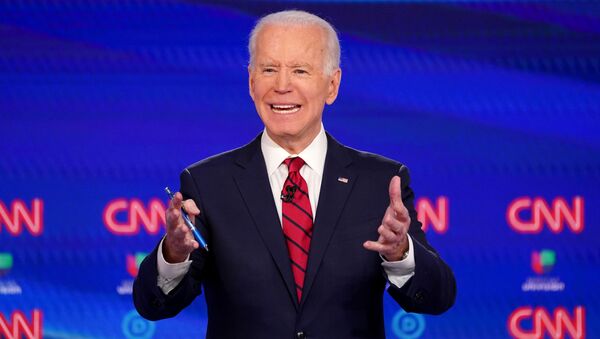 Only twice in US history has there been a female vice presidential candidate, and pressure has been growing on the two white male Democratic front-runners to include a woman in their ticket to promote diversity.

Democratic presidential hopeful Joe Biden has committed to selecting a woman as his running mate, in a historic move for the Democratic Party.

“My administration will look like the country and I commit that I will in fact pick a woman to be vice president,” Biden said at last night’s presidential debate vs. Bernie Sanders. “There are a number of women who are qualified to be president tomorrow. I will pick a woman as my vice president.”

He also pledged to appoint the first African American woman to the US Supreme Court.

Asked if he’d commit to a female running mate, Bernie Sanders replied, “In all likelihood, I will.”

“For me it's not just nominating a woman, it’s making sure we have a progressive woman,” he said. “And there are progressive women out there. So, my very strong tendency is to move in that direction.”

The only women to have ever run for US vice president from a major party were Democrat Geraldine Ferraro (on Walter Mondale’s 1984 ticket) and Republican Sarah Palin (as John McCain’s running mate in 2008). Only two African Americans, and no black women, have served on the Supreme Court.

The Democratic primary contest began last year as the most diverse field in US history, with a record six women, two African Americans, three Asian Americans, a Latino and the first openly gay contender.

By now, however, it has dwindled to a race between two white men in their late 70s; the remaining candidate, Tulsi Gabbard, is not considered a serious competitor having won just two delegates.