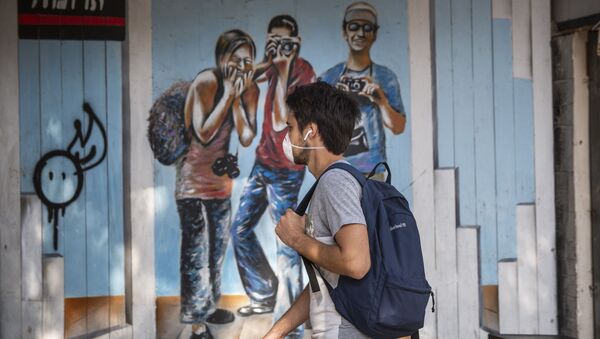 In Israel, curbing the spread of the COVID-19 coronavirus will come at a cost of some privacy. The country’s internal security service, Shin Bet, will be able to track citizens’ movements using cellular data, ostensibly to protect those who might have come into contact with coronavirus patients.

The Israeli government has approved a proposal that would allow the security agency Shin Bet to make use of Israelis’ cell phone data in a bid to curb the spread of the novel coronavirus.

With the number of infected patients rising to 250 by Monday, Israel has shut down schools and universities, restricted public gatherings to just 100 people and ordered a 14-day quarantine for anyone entering the country.

What exactly is being proposed now?

The new measure would allow Shin Bet (Israel’s analog to the FBI) to retroactively track the movements of people found to be infected with the coronavirus. The agency reportedly would not require court approval to perform this surveillance. Anyone who was within two meters of a sick patient will then receive a text message from the Health Ministry saying they should self-quarantine.

It remains unclear whether COVID-19 carriers will need to grant approval for their data to be used by Shin Bet. Prime Minister Netanyahu’s office has earlier reassured that the security service would not be involved in enforcing quarantine orders on those who violate them.

A Justice Ministry official told Channel 13 on Sunday that Shin Bet would only hand over the information about patients’ movements to the Health Ministry and would be authorised to make no use of this data other than to combat the pandemic. The proposal would be in effect for 30 days since it comes into force (it now has to be approved by the parliamentary subcommittee on clandestine services).

In recent weeks, governments in some of the worst-hit countries such as China, South Korea, Iran, Thailand and Taiwan have resorted to CCTV cameras and smartphone tracking to trace the movements of carriers of the disease.

The proposed protocol has sparked public debate over whether the use of digital tools with the noble goal of fighting the virus could violate civil liberties.

Benjamin Netanyahu himself has acknowledged that the sweeping mandate for Shit Bet allows for “a certain degree of violation of the privacy” of some people, but said that on the plus side, it is “an effective tool for locating the virus.”

Bezalel Smotrich, the transportation minister from the Yamina alliance and one of the five officials who drew up the measure,  has tweeted: “I can assure you all unequivocally: There isn’t and won’t be a ‘Big Brother’ in the State of Israel, even in the framework of an extreme event like what we are dealing with now.”

Nitzan Horowitz, leader of the opposition party Meretz, said that tracking citizens “using databases and sophisticated technological means are liable to result in a severe violation of privacy and basic civil liberties.”

Attorney Avner Pinchuk of the Association for Civil Rights in Israel said that keeping tabs on citizens constitutes a “severe infringement of the right to privacy.”