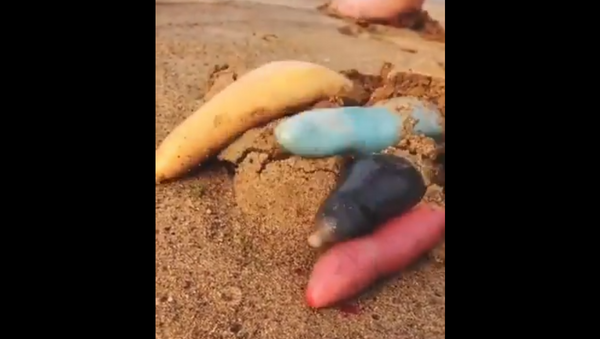 © Photo : Twitter/nakamanian
Subscribe
The Internet exploded this December after a beach in California was invaded by pulsating fat innkeeper worms which are distinguished by their rather peculiar phallic shape.

A puzzling video has emerged on Twitter in which four worm-like creatures, each having its distinct colour, were seen lying on a beach. At first, the creatures lie still, but when a beachgoer flicks them with a finger, they begin to writhe.

Twitter users took to the comment section to express their bewilderment with many pointing out that the creatures look a lot like male genitalia or colourful condoms filled with water.

The creatures are most likely the innkeeper worm which even in scientific circles was dubbed "penis fish". It is mostly found in East Asia and North America.