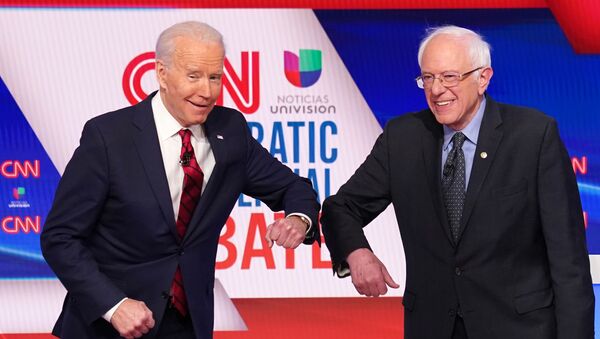 Former US Vice President Joe Biden and Vermont Senator Bernie Sanders debate each other at the CNN studios in Washington DC for Sunday's 11th presidential Democratic debate. The event is the first to feature just two candidates, the final contenders to outlast 20 fellow party opponents.

The venue for the two-hour Sunday debate - which will also be televised by Univision - was relocated from Phoenix, Arizona, to Washington DC, after organizers decided to conduct the event without an audience amid the spread of the Chinese COVID-2019 virus.

One moderator scheduled to assist at the event has chosen to step down because he was allegedly in proximity to a person who had been in direct contact with an individual who tested positive for the Wuhan coronavirus, NBC News said.

Hawaii Senator Tulsi Gabbard, while still officially a candidate,did not qualify for the 15 March event because participants must show at least 20 percent of the delegates that have been allocated to date. Gabbard has claimed just two delegates. According to the latest data, Biden has 860 delegates and Sanders 706.

Biden said in the clsoing argument that "Donald Trump has exacerbated every single one of these problems, both the immediate urgent need and how we're going to hold people harmless for the damage done as a consequence of this virus. It's important we do both".

Sanders said that it is "a time to rethink America as a country where we care about each other" and "not a country of greed and corruption".

Biden said it's time to "start listening to the science again".

Moderators asked candidates about vulnerabilities in their bases of support. Both Biden and Sanders dodged the question, pointing to other voting groups they are popular with.

"Why is it that I'm winning all those places? What's the reason? The reason is because they know I am a Democrat with a capital 'D' who believes our that base is the base of the Democratic Party", Biden said.

"I think it's imperative that we defeat Trump. I think our campaign of a biracial, bi-generational — multigenerational grassroots movement is the way to do it", Sanders said.

Bernie Sanders said that the US "must move toward democracy and human rights".

Moderators asked to clarify whether he would condemn achievements in dictatorships, after Sanders had praised Cuban literacy programs, which Obama has also praised.

Biden argued that he was "trying to change Cuban policies" by getting them "opened up".

Sanders suggested that the current energy system must be transition away "as quickly as possible" from fossil fuel while the US gives massive tax breaks to industry.

Biden said that he would rejoin the Paris climate accord.

Biden said he would stop deportations and would eventually only deport criminals.

People who would be useful on this stage tonight:

would be nice if Elizabeth Warren were on this stage

if "I miss Elizabeth Warren" tweets were delegates, she'd really be going somewhere

I wish that Elizabeth Warren was on stage so she could do to Joe Biden what she did to Michael Bloomberg.

“There are a number of women who are qualified to be president tomorrow. I would pick a woman to be my vice president”, Biden said.

“In all likelihood, I will”, Sanders said.

.@JoeBiden says if he wins the Democratic nomination his Vice President will be a woman. #DemDebate #DemocraticDebate #nexstar #NexstarNation @WTRF7News

“If Bernie is the nominee, I will not only support him, I will campaign for him [...] And I believe the people who support me will do the same thing because the existential threat to the United States of America is Donald Trump", Biden said.

Bernie Sanders reiterated he would support Joe Biden if he wins the nomination.

"You've been on the floor of the Senate time and time again" for cuts to social security and says he may have "changed your mind" on "but it doesn't change reality", Sanders said. Biden denied having supported cuts to Social Security.

Go to the YouTube. Take a look at Joe Biden's record of trying to cut Social Security. #DemDebate https://t.co/JGlWBqwQpn

Sanders said that he is "using a lot of soap". Biden said he avoids crowds and handshakes.

This debate with no audience is the best yet. The 2 candidates are respectful of each other and focused. The moderators are letting them talk. It feels important. More of this please.

We’ve barely begun and it’s obvious that all debates should be audience free. No pauses for screaming, actual back and forth. Much better

it's great not having a live audience for this. they should never have one again

Why would you ever have an audience again?

According to Biden, the US economy needs a "major bailout package" that will not benefit corporations.

According to Sanders, the wealthy are likely to weather the crisis but the majority of Americans will be hardest hit.

“This is like a war, and in a war you do whatever is needed to be done to take care of your people”, Biden said.

Joe Biden pushed back against Bernie Sanders’ argument that the coronavirus crisis demonstrates the need for a Medicare for all healthcare system. Biden stressed that Italy, which is seeing a spike in COVID-2019 cases, has a single-payer system, so its policy cannot prevent a pandemic.

Bernie Sanders said that he would "shut up this president right now" as he undermines his own officials with his "blabbering" that's "confusing the public".

"What do you say to the American people confronting this new reality?", a moderator asked.

Joe Biden said that this "is bigger than any one of us. This calls for a national rallying to everybody move together", adding that he wanted to increase coronavirus testing.

Bernie Sanders slammed Trump's response to the coronavirus pandemic, accusing the US president of "undermining the doctors and the scientists who are trying to help the American people”.

Among Democratic presidential primary voters who have already voted or plan to do so, 61% support Joe Biden while 32% would prefer Bernie Sanders as their party's nominee, the latest Wall Street Journal/NBC News poll shows https://t.co/v3rufApAmS