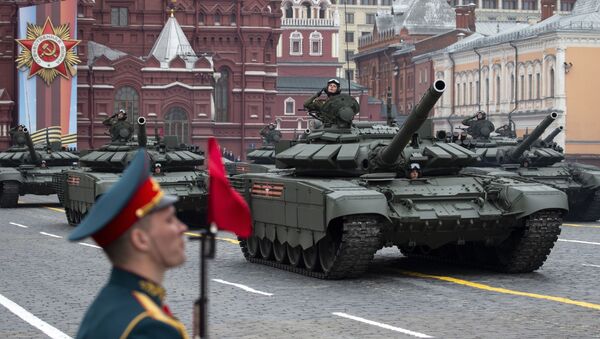 © AP Photo / Alexander Zemlianichenko
Subscribe
MOSCOW (Sputnik) - A delegation of senior US officials will come to Moscow for the parade marking the end of World War Two unless Russia changes it plans, Ambassador John Sullivan said in an interview on Sunday.

The top US diplomat in Russia told the Kommersant daily that US President Donald Trump was committed to sending a very high-level delegation to Moscow for the Victory Day Parade on 9 May.

He said the 75th anniversary of the end of WWII was an extremely important date, but the global outbreak of the coronavirus had made planning very difficult. Many events have been canceled worldwide.

Russian presidential spokesman Dmitry Peskov said earlier that US President Donald Trump would not attend the military parade in Moscow. The Kremlin does not know who will be sent in his place, he added.

Trump got behind Vladimir Putin’s proposal to hold a summit of the five permanent UN Security Council members.

John Sullivan told the Kommersant daily that Trump had suggested holding the leaders’ meeting in New York during the week-long general debate in September, but neither a date nor the agenda had been agreed on.

The diplomat said the fact that all five were nuclear-weapon states called for arms control talks. This is what Putin proposed to discuss at the summit in their private talk on 5 February, Sullivan added.

Peskov said in January that China and France were on board with the idea of holding the summit. The UK Embassy reportedly confirmed this week that London also supported it.

Sullivan pointed out that the US is pushing China to commit to nuclear arms limits and sees more urgency in this than in bringing the United Kingdom or France to join the treaty.

The top diplomat claimed that Russia welcomed China’s participation in the pact but believed it was up to Washington to convince Beijing to join.

He added that bringing London and Paris, key US allies, into the fold was "less expedient" since they were not considered a security challenge by the Pentagon.

The Chinese authorities are not pursuing nuclear parity with the United States or Russia and are trying to achieve a "nuclear triad" of land, sea and air forces, Sullivan pointed out.

The New Start treaty limiting deployed nuclear warheads of the two powers expires next February. The diplomat said there was still time to strike a three-party agreement that would reflect the "strategic reality."

Washington has not yet announced whether it plans to extend the pact, although Russia has repeatedly invited it to prolong the deal for another five years without preconditions. US President Donald Trump has instead proposed working on a new trilateral nuclear deal between the US, Russia and China. However, Beijing has rejected the idea. Moscow, in turn, has said it is not against China's participation in a new deal, but will never exercise pressure.

000000
Popular comments
Putin likes to be the good guy who is hopeful things will change for the better. The problem is good guys get step-on and taken advantage of. Russia should be more like a chess player about their interest and 'good guy' can take second place. Some of Russia's problem might be because the of the 'good guy' approach. If Russia took a harder stance on Syria, Erdo would be in a weaker position.