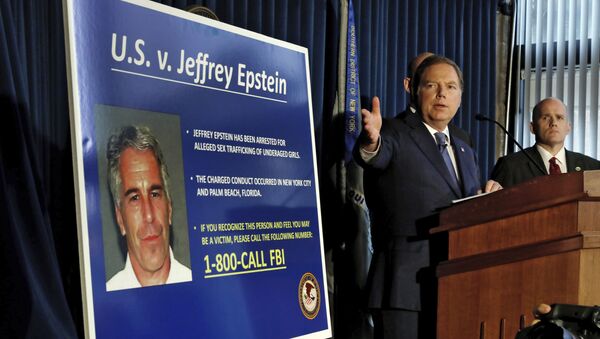 Oleg Burunov
All materialsWrite to the author
On Monday, a New York prosecutor said that the UK's Prince Andrew is refusing to aid US investigators in their probe into child sex trafficking as part of the Jeffrey Epstein case.

Speaking to The Sun on Friday, 26-year-old Caroline Kauffman claimed that in early December 2010, she was raped by convicted paedophile Jeffrey Epstein in his mansion, where she was then sexually assaulted by a guest at a “royal party” thrown for Prince Andrew.

Kauffman said that she plans to file a lawsuit in connection with the rape which allegedly took place at Epstein’s New York home where she was approached by the Duke of York.

She claimed that Prince Andrew appeared to be "into her" but that he lost interest after Kauffman said that she was 17. The woman added that ahead of the party she attended a meeting with Epstein, which she thought was just casting for a modelling gig.

“I'm coming forward now to let the world know how much of a monster Epstein really was. Also I want to encourage anyone has ever been abused or experienced trauma that they should come forward and talk about it and get proper care for it”, Kauffman pointed out.

Her lawyer Spencer Kuvin, who represented three other Epstein victims, told The Sun that he believes Kauffman “is credible 100 percent”.

He said that the lawsuit may be lodged in the next few weeks and that Kauffman is ready to cooperate with prosecutors investigating Epstein's co-conspirators.

Epstein had been under investigation since 2005 before he died in custody last year; he pleaded not guilty to all charges of his sexually assaulting and trafficking dozens of underage girls in New York and Florida during the early 2000s, and faced up to 45 years in prison.

While the official cause of his death was reported to be suicide by hanging, it remains disputed as its circumstances raised doubts as to whether he was murdered before he could testify against his high-profile friends, including Donald Trump, Bill Clinton and Prince Andrew, among others.

Manhattan-based US attorney Geoffrey Berman has, meanwhile, stated that the Duke of York “has now completely shut the door on voluntary cooperation” with US investigators when it comes to their probe into child sex trafficking as part of the Jeffrey Epstein case.

The statement comes amid the ongoing fallout from Prince Andrew’s “car crash” interview with the BBC in November 2019, when he said, in particular, that he did not regret befriending Epstein, who committed suicide in a New York jail in August of that year while awaiting trial on sex trafficking charges.

The interview was followed by the Duke of York’s announcement that he would step down from public duties for the "foreseeable future", because his association with Epstein had become a “major disruption” to the Royal Family.