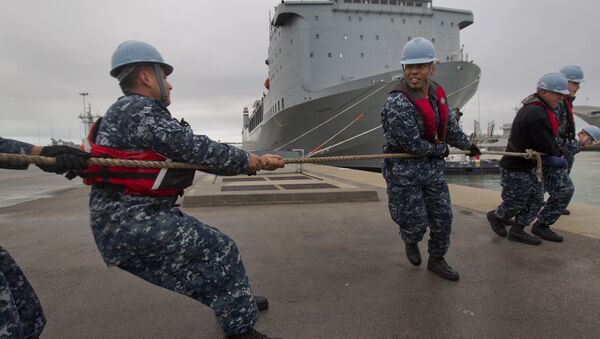 © AP Photo / Miguel Angel Morenatti
Subscribe
The Rota Naval Base complex is a joint bastion that hosts the Spanish and US Navy. On its more than 2,000 hectares there is an airport and a port with a capacity of a thousand ships per year.

Spanish Defence Minister Margarita Robles on Monday confirmed that the first coronavirus victim in the province of Cadiz, where the US Rota Naval Base is located, was an officer.

Shortly thereafter, his inner circle, including family, was isolated (about twelve people).

The news has sparked a conversation about the base’s future, which, no matter how much is discussed, would never close due to a number of reasons: firstly, because even a temporary closure would be a blow to Spain’s southern region; secondy, because the United States seeks to expand the presence of its Sixth Fleet, which is deployed in this area of the Atlantic and controls access to the Mediterranean.

Manuel Urbina, President of the Working Group of the Rota Naval Base (Cadiz), Fernando Herrera, Commissioner for Prevention of Dangerous Situations of the airport management company, and Mayor of Rota Javier Ruiz Arana have shared their views on the matter.

"It’s clear that the base is very important; every day planes and ships arrive in Rota, although at the moment we don’t have specific protocols beyond those developed by the WHO", Manuel Urbina said.

To date, the airport hasn’t changed its operations schedule. Its capacity is 20,000 flights per year, which is important, since it is not exclusively a military facility.

First Death From Coronavirus Confirmed in Spain
The situation changes every day, but the truth is that at the moment there’s no specific protocol for the entry and exit of people, as well as the import and export of goods from the airport. The measures taken include a mere questionnaire about whether a passenger visited China or was at risk of contact with those infected. According to Fernando Herrera, these steps are short-term in light of today’s developments.

The Rota Naval Base has another critical factor: it is connected to Italy. As an American base, it has a direct link with a base in Naples.

"Rumour has it that there is a quarantined ship, but I can’t confirm anything, because we don’t have any official information about it", Manuel Urbina said.

The testimony of civilian personnel on the base suggests ​​the prevalence of coronavirus at one of Spain’s most airtight bases. But this crisis has other connotations that go beyond healthcare. A military transition is now underway at Rota, which has been threatened by the virus.

The temporary closure of the base would strike a fatal blow to this southern Spanish region and the city of Rota in particular. According to a bilateral agreement between Spain and the United States, Rota hosts at least 4,250 US troops. The activities of these people centre around four AEGIS destroyers, 13 naval reconnaissance aircraft, and 18 maritime patrol and ocean surface surveillance aircraft.

These are official figures, but the United States is deploying more and more of its people and weapons: Washington wants to expand the presence of its Sixth Fleet, which is deployed in this area of the Atlantic and controls access to the Mediterranean. The US presence is an economic asset, without which the region’s sustainability is impossible. According to sources at the base, in 2018 alone, the base’s economic impact on the Gulf of Cadiz region amounted to about €450 million.

"If you ask me whether we will expand our presence, I’d say that we can do it tomorrow; we already have the necessary infrastructure in Rota", Tod Daniel Wolters, Head of the US European Command (EUCOM), said on 25 February, confirming to the Senate his intention to introduce two new ships into the base’s fleet, since "this will strengthen our commitment to European and African allies".

The current AEGIS destroyers would be replaced by more advanced vessels, and in addition, two more ships would eventually be added to them, amounting to a total of six vessels. This would imply an increase by 600 US soldiers as well as the integration of a new fleet of helicopters, which is not provided for in the US-Spain bilateral agreement, signed in 1988. However, for decades the agreement has been ignored whenever Washington felt the need to do so.

"The more destroyers arrive at the base, the better for the city. Rota is ready to increase the number of military personnel and the possible expansion of the base", Javier Ruiz Arana, the mayor of Rota, said.

Traditionally, more military activity implies economic benefits for the city, so the population has always supported the base.

"We are dependent; we have been enslaved for decades, because the base offered employment expectations and economic stability, but over time that expectation has deteriorated. Today there are more cons than pros in the base", Inmaculada Nieto, a local politician, spokesman for Adelante Andalucía left-wing group in the Andalusian Parliament, said.

The base and the military industry that revolves around it are a lifeline for the province, which suffers from the highest unemployment rate in Spain. Last summer, the number of those unemployed in the Gulf of Cadiz was 77,601, which is more than 30% of the total number of unemployed. It was at this critical moment that the coronavirus appeared and spoiled the game.