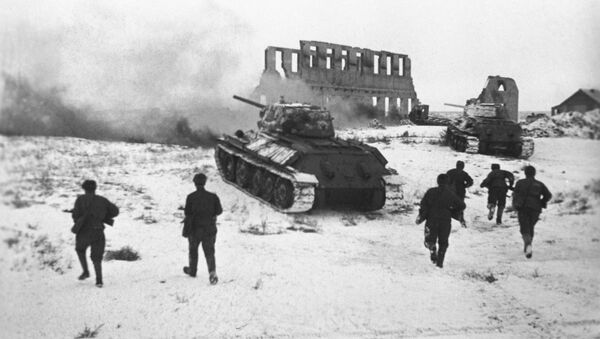 MOSCOW (Sputnik) - The 'Tragedy of Europe' exhibition, dated to the 75th anniversary of victory in World War II and focusing on the Red Army's humanitarian mission for liberating Europe, has been vandalized in the Romanian capital of Bucharest, the Russian Center of Science and Culture in Bucharest said on Friday.

On the night into Friday, vandals covered the billboards with drawings and stickers with nationalist slogans, such as 'Bessarabia is Romania', 'Better dead than communist', and swastikas, the Russian Center of Science and Culture in Bucharest said, condemning the "low cultural level" of the vandals.

A new exhibition, dubbed 'Military posters in the years of war', was arranged at the same location.

The exhibition was arranged outdoors, in the format of billboards. It mainly e featured photographs provided by the Russian Ministry of Culture, the Russian Military Historical Society and the Museum of the Great Patriotic War.