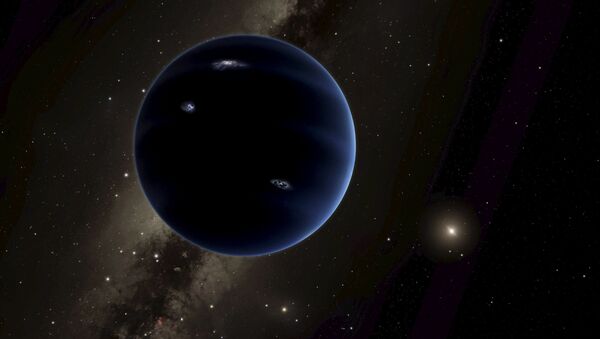 © REUTERS / R. Hurt/Caltech
Subscribe
The new discovery, by researchers from the University of Pennsylvania in the United States, paves the way for identifying more similar trans-Neptunian objects (TNO) and will reportedly assist future research for the hypothetical Planet Nine.

Over 300 newly-identified minor planets located beyond the orbit of Neptune, but remaining within the solar system, have been discovered, including over one hundred other trans-Neptunian objects, according to a new study published in The Astrophysical Journal Supplement Series.

The study, carried out by graduate student Pedro Bernardinelli and Gary Bernstein and Masao Sako, professors of the University of Pennsylvania’s School of Arts and Sciences, also describes a new way of detecting similar types of objects and could aid the search for undiscovered planets.

The researchers made their discoveries using data collected over four years by the Dark Energy Survey (DES), designed to study galaxies and supernovas.

“The number of TNOs you can find depends on how much of the sky you look at and what’s the faintest thing you can find,” said Bernstein in a statement, cited by university website Penn Today.

The astronomers developed a way to track the movement of TNOs. According to Penn Today, the new TNO surveys take measurements every one or two hours, allowing researchers to more easily follow the movement of the distant celestial bodies.

“Dedicated TNO surveys have a way of seeing the object move, and it’s easy to track them down,” Bernardinelli said. “One of the key things we did in this paper was figure out a way to recover those movements”.

Bernardinelli whittled a list of 7 billion “dots,” all possible objects detected to be above the image background levels, down to 400 candidates that were seen over at least six nights of observation, finally verifying the results.

After months of analysis and method-development, the researchers filtered the list of candidates down to actual TNOs. They found 316 actual TNOs, including 245 discoveries made by DES and 139 new objects not previously identified.

“There are lots of ideas about giant planets that used to be in the solar system and aren’t there anymore, or planets that are far away and massive but too faint for us to have noticed yet,” said Bernstein.