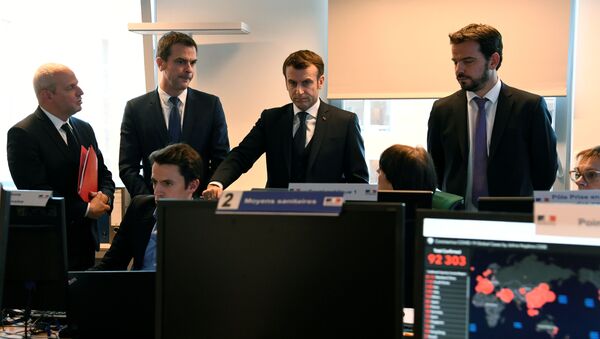 The World Health Organization (WHO) has declared the Wuhan coronavirus (COVID-19) a pandemic. The number of cases of infections worldwide has surpassed 127,000 and more than 4,700 people have died from the disease.

French President Emmanuel Macron said Thursday that the ongoing coronavirus outbreak is the most severe health crisis that France has seen in a hundred years. Macron announced measures to tackle the spread of the contagious Chinese infection.

"This epidemic is the worst health crisis France has seen in a century", Macron said in an address to the nation televised by the Franceinfo broadcaster.

The French president said that all educational establishments across the nation will be closed until further notice starting 16 March. Macron also vowed to ask French companies to, where possible, allow staffers to work from home. Authorities will assist the affected entities and reimburse expenses inculcated from the newly imposed measure, according to Macron.

Macron added that the public transport system, however, will remain operational across the nation amid the outbreak, asking French residents to limit non-essential domestic travel.

Macron Reportedly Warns of Coronavirus ‘Epidemic’ in France, Says It’s Only the ‘Beginning’
While the coronavirus outbreak has reportedly displayed signs of a decline over the last few days in mainland China, and especially in the city of Wuhan - ground zero for COVID-2019 -  European nations have been hit with a speedy rise in numbers of coronavirus cases.

As of today, France has nearly 2,000 confirmed COVID-19 cases, with 33 deaths reported. In early March, French authorities requisitioned all stockpiles of face masks over the virus outbreak to distribute among medical workers and those infected. Now, a prescription is required to buy a mask at a drugstore.

French Minister of Economy and Finance Bruno Le Maire suggested that the spread of COVID-19 would have significant consequences for the French economy.