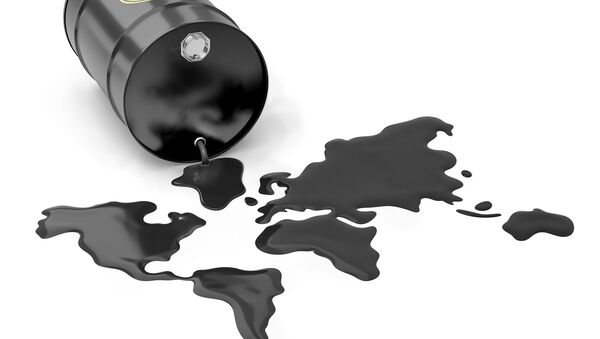 New Delhi (Sputnik): Oil prices plunged to multi-year lows on Monday after OPEC failed to strike a deal with its allies, led by Russia, about oil production cuts. That, in turn, caused Saudi Arabia to slash its oil prices as it reportedly looks to ramp up production.

The crude oil price war triggered by Saudi Arabia in the wake of the failure of OPEC + to agree fresh production cuts will have wide-ranging ramifications for the Indian economy.

Facing an economic slowdown, India stands to gain significantly from the oil price cut, according to experts, as the country is heavily dependent on crude imports for its energy needs.

The Indian Industry association, Assocham, believes that despite falling Indian stock markets, the crude price fall may be good news for the country's economy.

Secretary-General of industry body Assocham, Deepak Sood, said, “India being a large importer of crude oil, fall in prices, would be a positive for the Indian economy, although there is global sentimental downside.”

“Going forward, low prices of crude can be a demand driver for India, from the automobile industry to consumption, as inflation would be tamed. Lower inflation would also help further cuts in the interest rates,” Sood said, adding that India’s global import bill would fall sharply and help the country’s current account deficit, giving elbow room to the government.

India imports more than 80 percent of its crude oil. With lower prices the country could save $1.5 billion on its imports per dollar fall in the price of crude. The oil import bill was $112 billion during 2018-19 and between April 2019 and March 2020, India imported crude oil worth $87.7 billion, according to a report by Care Ratings.

In a report titled "Oil, Savings and Earnings", released on Wednesday, Kotak Institutional Equities forecast that global oil turmoil may result in “benign crude oil prices in the near term”.

Though India is in a comfortable position on the foreign exchange front with reserves worth $476 billion, the low crude price signals a huge reprieve on the inflation front. Retail inflation growth in India more than trebled from 1.97 percent in January 2019 to 7.59 percent in January 2020. Inflation data has shown a rising trend rate every month in the last year. With every dollar drop per barrel in crude oil prices, inflation is also estimated to soften at a rate of 0.30 percent. A lower rate of inflation will help the RBI cut key policy rates to induce growth in the economy.

The catch, however, is whether the government will pocket the gains on account of the lower crude import bill by imposing higher excise duty, thereby keeping the retail rates at the same level and earning tax revenue for itself? Or, will it pass on the benefits of the lower crude oil prices to the consumers in the form of reduction in retail rates, which may, in turn, boost consumption? The latter would definitely lift the mood in the economy and help the automobile sector as “lower retail fuel prices translates into lower cost of ownership of automobiles”, says the Kotak report.

However, in a similar situation, a few years back between 2014 and 2017, when oil was falling, the Prime Minister Narendra Modi-led government opted to impose excise duty and shore up its own revenue instead of granting relief to consumers. Between November 2014 and January 2016, excise duty on diesel and petrol were raised in nine instalments. According to Indian government data, excise collection for the government more than doubled from $14.1 billion in 2014-15 to $32.25 billion in 2017-18.

But What's About Domestic Oil Companies?

The picture may not be all that rosy for the upstream oil companies in India, which are involved in oil exploration and production.

Companies like Oil and Natural Gas Corporation (ONGC), Cairn India, Oil India, and Reliance are likely to be hit due to the crash in crude prices. All these companies have lined up capital expenditure to the tune of $12.16 billion for 2020-21. Experts believe it may remain unaffected as the oil price correction is a “temporary phenomenon”. Reliance Industries alone has lined up investment of $5 billion in oil exploration for 2020.

The Indian economy had been facing headwinds for the last two years with growth dipping from a high of over 8 percent in 2018 to 4.7 percent in the final quarter of 2019. The government last year tried to boost the economy through a corporate tax cut to boost demand but the economy failed to respond. It remains to be seen how best the government is able to utilise the gains on the crude oil front.