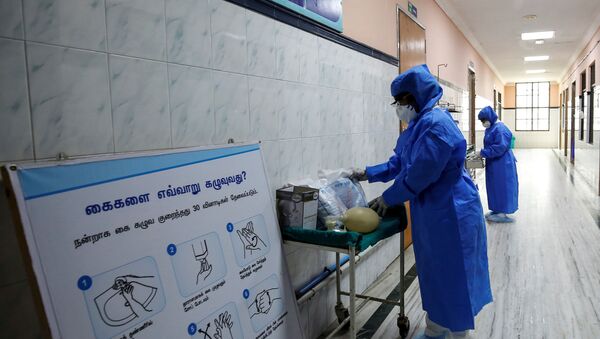 © REUTERS / P. Ravikumar
Subscribe
New Delhi (Sputnik): With the number of COVID-19 cases increasing in the Indian state of Kerala, the state government has introduced several measures to stop the spread of the infection.

The Indian state of Kerala on Tuesday ordered the closure of colleges, schools up to seventh grade, and cinemas, until 31 March as a precaution against the novel coronavirus, formally known as COVID-19.

During a press conference in the state capital Thiruvananthapuram, State Chief Pinarayi Vijayan said that the situation remained serious and asked people to scale down religious festivals, weddings and other public gatherings; all government functions have also been suspended.

The state chief stated that out of 15 people affected by COVID-19, three have been discharged from hospital upon recovery. He said that four people had a history of travel to Italy and that the others contracted the disease from them.

India has reported 43 confirmed cases of COVID-19. Thousands of people, who had travel history to countries affected by the virus have been kept under observation.

Aside from evacuating over 800 Indian nationals from Wuhan, China, the epicentre of Coronavirus pandemic and from the COVID-19 infected Diamond Princess Cruise ship in Japan, New Delhi has evacuated 58 people from Iran, one of the worst affected countries after China.