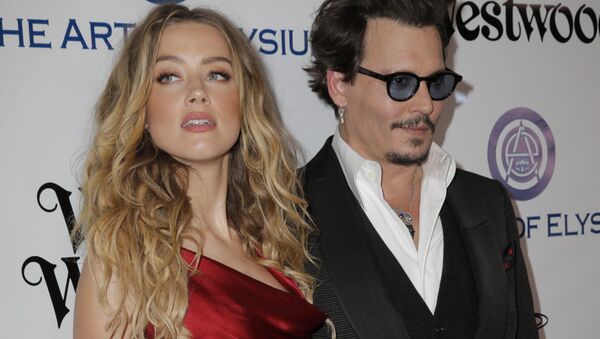 © AFP 2021 / Alison Buck
Subscribe
Pirates of the Caribbean film star Johnny Depp has been embroiled in a legal dispute with his ex, Amber Heard, since 2017, after she accused the actor of being physically and verbally abusive. It was later revealed in a joint statement that there was never any intent of physical or emotional harm throughout the relationship.

Text messages by Amber Heard to her talent agent surfaced on Tuesday as part of an ongoing defamation legal case between the actress and her star husband, Johnny Depp.

Both parties were in regular communication with their CAA talent agent, Christian Carino, to whom the messages were sent.

Among the many messages around the former couple, texts from Heard reveal that she "loved him" and that she was "sorry”.

”Christian – do you think he and I will ever speak again?” one message from the Aquaman star read, dated 2 October 2016.

“Does he hate me?” she followed up.

“I don't' see why or how we could just stop talking to each other...Or how are why we could both want to talk to each other, either".

Carino advised Heard to drop the issue but Heard was persistent that she couldn’t talk about the break up and wanted to know how Depp was feeling.

Another exchange of messages between the two took place months later, following Heard's split with Tesla CEO Elon Musk after the relationship was revealed to the public.

Carino brought up the fact that Musk was his client's rebound after Depp.

"You weren't in love with him and you told me a thousand times you were just filling space”, he wrote.

“I know ... I wanted time to grieve and recover in my own time", Heard responded.

“I hate that yet again a man let's me fall on the spikes by myself...Meaning. They are mad at me for leaving them and put things like this out there...like that", she wrote.

Heard responded that he should take his own advice.

“I wasn't ready for another relationship or breakup to be out there but yet it is...", she added.

She followed with another string of messages bemoaning her break up with Depp.

"I'm devastated...I want to give up. Nothing has ever broken my heart more than losing JD...And it has always been that way".

"C, do you ever think we could ever speak again...I don't know how to ever survive", she said.

Heard suggest sending Depp a letter she had penned, and admitted she wanted apologise to him.

"I [have] written so many notes...Can you give him one? I don't know how or where to start There's no way to begin/ end all I have to say but I have so many. Finally, I am single. Clear in my heart and mind. I just want him to know I loved him. And that I am sorry” Heard wrote.

Heard said she was worried about reaching out to Depp after her breakup with Musk, as it may come across as desperate.

It is unknown if Depp received any physical notes but Heard expressed her dismay over a birthday message not going through.

”I text him happy birthday...Didn't go through. Probably for the best. But thought it was the right thing to do. Wanted to let you know".

The conversations go back to 2016, and were sent just weeks after Heard accused her then-husband of physically attacking her with a phone, ultimately leading to a divorce and a restraining order.

At the time, Heard looked to be on the offence against Depp but the messages demonstrate a sense of shattered loss and her own inability to express authentic love.

Depp also looked to the agent to discuss the allegations, making it clear he did not wish he have an "undeserved wife-beater charge," calling Heard's accusations a "flat-out lie".

"When Amber Heard claims months after obtaining the TRO against him that Johnny is the love of her life, it is scarily reminiscent of other witness testimony that Ms. Heard was screaming 'I love you, don’t leave me' as Mr. Depp was carted off to the hospital during the afternoon she violently severed his finger in Australia", Depps attorney said, speaking to The Blast.

"Regarding Elon Musk, on whose Tesla board an owner of the Sun newspaper curiously sits, Ms. Heard laments that “yet again a man lets me fall on the spikes by myself,” by which she says she means Musk is 'mad at her for leaving.' Alas, Ms. Heard told her agent that she was 'just filling space' with Mr. Musk. We are investigating whether some of that space he filled may have been financial. Does Ms. Heard write about Mr. Depp as any real abuse victim would of their attacker? Any reader can judge it for themselves", he added.

The text messages became important as the legal cases go to trial, including a defamation case against The Sun in the UK, as well as the case Depp launched against Heard in the US state of Virginia.

Among the messages released, Heard believes some include admissions from Depp of domestic violence against her, while Depp believes his ex-wife’s texts do not indicate victim behaviour.