Trump Vows to Carry on With Rallies Despite Coronavirus Spread 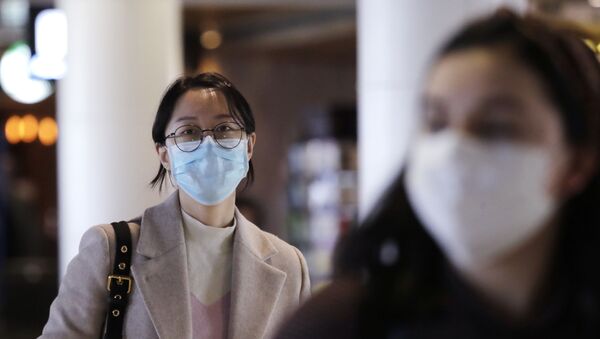 © AP Photo / Elaine Thompson
Subscribe
The novel coronavirus has made its way to within miles of the White House, with over 500 cases reported nationwide. Donald Trump has repeatedly downplayed the severity of the outbreak, which could disrupt this year’s election cycle.

US President Donald Trump has vowed not to hold off campaign rallies despite coronavirus spreading across the United States.

“We will have tremendous rallies and we're doing very well, and we’ve done a fantastic job with respect to that subject,” Trump told reporters at his Mar-a-Lago resort ahead of a sit-down with Brazil’s Jair Bolsonaro on Sunday, when asked if he would halt the campaign.

The pneumonia-like virus, designated COVID-19 by the World Health Organisation, has infected over 105,000 people globally and killed more than 3,500 as of Sunday, mostly at the epicentre in mainland China. Some of the other worst-hit regions are Italy, South Korea and Iran.

The United States has registered over 500 cases and 22 deaths from COVID-19. The first case was confirmed in Washington DC, the nation’s capital, on Sunday – a reverend in his 50s with an underlying health condition, who does not appear to have travelled abroad or had close contacts with anyone known to be sick.

Virus fears have affected major events in the US like music shows, sports competitions and several large-scale tech conferences such as Google Cloud Next and I/O, Facebook’s F8, and SXSW. Meanwhile, both Trump and the Democratic presidential hopefuls keep holding rallies.

Trump, who has repeatedly downplayed concerns over the outbreak, had six ones last month. His website shows there are no rallies announced in the coming weeks, however.

The virus “doesn’t bother me at all,” Trump said on Saturday when pressed on whether he felt it was a risk to have crowds of people come together at his rallies.

.@realDonaldTrump says he's not considering not having his political rallies over coronavirus concerns.

The president has been criticised for his administration’s handling of the virus. The Associated Press on Sunday cited a federal official as claiming that the White House had overruled health officials who wanted to recommend that the elderly and physically vulnerably be advised not to fly on commercial airlines.

The Centres for Disease Control and Prevention specifically advise older people, as well as those with underlying health conditions, against going out. A spokeswoman for Vice President Mike Pence dismissed the AP story as “complete fiction.”

Eaerlier Trump claimed that anyone who needs a coronavirus test can get one, although a number of reports suggested that this wasn’t the case. Another troubling episode related to the Grand Princess, a cruise ship with more than 3500 on board where 21 passengers have tested positive for COVID-19. The ship is currently circling international waters off San Francisco Bay, after Trump refused to let it dock so that US coronavirus numbers don’t “double.”

000000
Popular comments
The secret service should at least limit the number of people who get to shake hands with the POTUS. A medical team should also be on hand to screen people for fever and other signs/symptoms of disease. Trump better NOT underestimate this biological warfare agent. Everybody who surrounds/travels with the POTUS and the VP and the top-level executive officials should have masks and disinfectants on hand at all times. US military also better make sure this virus does not incapacitate them, particularly the command&control and strategic nuclear forces groups.
Tk
9 March 2020, 15:46 GMT
000000
Newsfeed
0
New firstOld first
loader
LIVE
Заголовок открываемого материала
Access to the chat has been blocked for violating the rules . You will be able to participate again through:∞. If you do not agree with the blocking, please use the feedback form
The discussion is closed. You can participate in the discussion within 24 hours after the publication of the article.
To participate in the discussion
log in or register
loader
Chats
Заголовок открываемого материала
Worldwide
InternationalEnglishEnglishMundoEspañolSpanish
Europe
DeutschlandDeutschGermanFranceFrançaisFrenchΕλλάδαΕλληνικάGreekItaliaItalianoItalianČeská republikaČeštinaCzechPolskaPolskiPolishСрбиjаСрпскиSerbianLatvijaLatviešuLatvianLietuvaLietuviųLithuanianMoldovaMoldoveneascăMoldavianБеларусьБеларускiBelarusian
Transcaucasia
ԱրմենիաՀայերենArmenianАҧсныАҧсышәалаAbkhazХуссар ИрыстонИронауОssetianსაქართველოქართულიGeorgianAzərbaycanАzərbaycancaAzerbaijani
Middle East
Sputnik عربيArabicArabicTürkiyeTürkçeTurkishSputnik ایرانPersianPersianSputnik افغانستانDariDari
Central Asia
ҚазақстанҚазақ тіліKazakhКыргызстанКыргызчаKyrgyzOʻzbekistonЎзбекчаUzbekТоҷикистонТоҷикӣTajik
East & Southeast Asia
Việt NamTiếng ViệtVietnamese日本日本語Japanese俄罗斯卫星通讯社中文（简体）Chinese (simplified)俄罗斯卫星通讯社中文（繁体）Chinese (traditional)
South America
BrasilPortuguêsPortuguese
NewsfeedBreaking
07:22 GMT'Can't Get This to Function at All': 'Confused' Joe Biden Suffers Mic Malfunction at Quad Summit
07:19 GMTEuropean States to Remain US ‘Underlings’ Without Wake-Up Call After Paris Humiliated
07:18 GMTChina Warns US Will 'Dump' India, Australia, and Japan as Four Nations Convene for Quad Summit
07:14 GMT5.8-Magnitude Earthquake Strikes Ocean South of Africa, USGS Says
07:03 GMTCNN Anchor Chris Cuomo Mum on Sexual Harassment Allegations Against Him
06:51 GMTUK Labour Party in Hot Water for Inviting Huawei to Conference
06:40 GMTBiden's National Security Adviser May Be Guilty of Perjury Over Clinton Campaign's Russiagate Plot
06:33 GMTBoris Johnson 'Ready to Give Visas to 5,000 Foreign Truckers' Amid UK's HGV Driver Shortage Crisis
05:04 GMT'War Criminal': Watch Crowd Boo Hillary Clinton as She Accepts Queen's University Chancellorship
05:00 GMT'Agroexpress' to Offer Exporters Online Shipment Applications
04:37 GMTPakistani Prime Minister Calls for International Support for Taliban-led Afghan Government
04:30 GMTHello There! Adorable Retriever Wants to Come In
04:24 GMTLive Updates: Quad Leaders Pledge to Produce 1 Bn Doses of COVID-19 Vaccines by End of 2022
04:23 GMTLocal Sheriff Praises Efforts to Mitigate Del Rio Migration Crisis Amid Biden's Criticism
04:10 GMTUK Pushes Back Against Bolsonaro's Claim That Johnson Requested Emergency Food Deal
02:57 GMTTurkish Military Camp in Northern Iraq Comes Under Missile Fire – Reports
01:56 GMTGOP Golden Boy? Republicans Strongly Back Florida Gov. DeSantis for 2024 Primary Sans Trump
01:41 GMTElon Musk, Grimes Part Ways After Three Years of Dating
01:39 GMTDHS Head: Del Rio Camp Cleared, Agents Who Violently Corralled Migrants Placed on Admin Duties
01:09 GMTCanada's Trudeau Reveals Two Detained Canadians Have Been Released After Wanzhou Departure