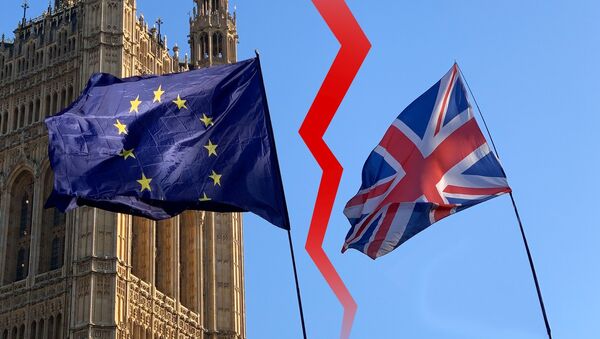 According to Institute of Economic Affairs (IEA), the UK has a golden opportunity to rid itself of the EU’s rules and regulations after Brexit, which it argues would benefit the country’s economy greatly. In the meantime, Johnson’s team remains in talks with the EU, as the two sides attempt to agree a free trade deal.

UKIP founder Alan Sked has shared his view on whether Britain should leave the EU without trade deal, as Brussels and London struggle to find compromises on issues such as access to fishing waters, and freedom of movement.

Sputnik: Would a no deal Brexit benefit the UK?

Alan Sked: It would enable Britain to lay down its own regulations and to take its own decisions, to put forward our own priorities, and not to worry about interference from Brussels, so it is an opportunity.

So far there has just been a kind of clash in negotiations, with one side telling the other that it can or can’t do this, or something else, so I don’t think that the EU realises that the UK has been a totally independent country, and that we are no longer dependent on it for superior government guidance, or regulation, or for jurisdiction by the European Court.

There is a government in place now that has a large majority in parliament, which will stick up for British sovereignty; a concept which the EU doesn’t seem to realise exists.

Sputnik: Could the EU potentially be forthcoming with a free trade deal after the UK leaves the bloc under WTO rules?

Meanwhile; there might be deals with the US, Japan, Australia and other countries, which might put pressure on the EU, but I think that the EU is simply still in denial, and still believes that it is dealing with Theresa May, and it still thinks that it’s got collaborators in the House of Commons, whereas they have all lost their seats.

Sputnik: Could parts of the NHS be sold off to US companies as part of post Brexit trade deal with the Trump administration?

Alan Sked: The British Government knows very well that if it tried to sell out the NHS to Trump; it would be so unpopular in this country that Boris Johnson’s majority would soon disappear.