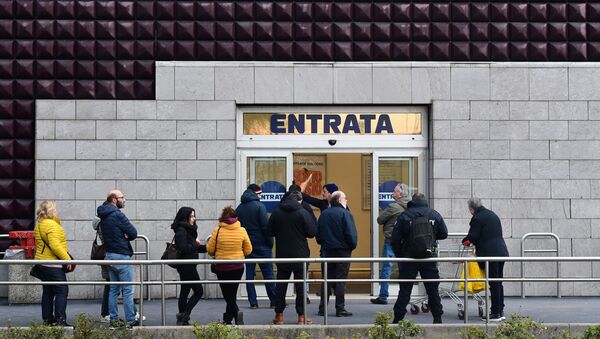 ROME (Sputnik) - The number of coronavirus-related deaths in Italy surged to 366 on Sunday, the head of the civil protection agency said.

Angelo Borrelli told reporters at a daily briefing that 133 people succumbed to the COVID-19 viral disease in the past 24 hours.

Almost half of those deaths were people in their 80s and 90s. The biggest share of deaths was reported in the northern state of Lombardy.

Prime Minister Giuseppe Conte has imposed travel restrictions in northern and central regions in a bid to contain the spread of the virus.

The number of coronavirus infections in Germany has reached 902, the Robert Koch Institute, the government’s disease control authority, said on Sunday.

This is a marked rise from 847 cases reported earlier in the day. There have been no virus-related fatalities in the mainland, although a 60-year-old German national has died in Egypt.

All but one 16 German states have reported infections with the COVID-19 viral disease, the exception being Saxony-Anhalt. The western state of North-Rhine Westphalia has almost 400 cases.

The number of coronavirus infections in France has reached 1,126 cases, the Public Health Authority said in an updated post on Sunday.

The country has reported two more deaths as of 3 p.m. (14:00 GMT), bringing the death toll to 19. The number of infected from the evening before stood at 949.

France emerged last month as one of the countries with the fastest-growing number of COVID-19 cases. It has the third-largest number of infections after Italy and Germany.

Switzerland has confirmed the second death from the coronavirus disease (COVID-19) in the country, the Federal Office of Public Health (FOPH) said on Sunday.

"Switzerland recorded its second death attributed to the coronavirus; a 76-year-old man from the canton of Basel-Landschaft. The FOPH is in contact with the authorities of the Canton of Basel-Land," the office said in a statement.

So far, the country has registered 281 confirmed cases of the disease, while 51 others are yet to be confirmed after repeated tests.