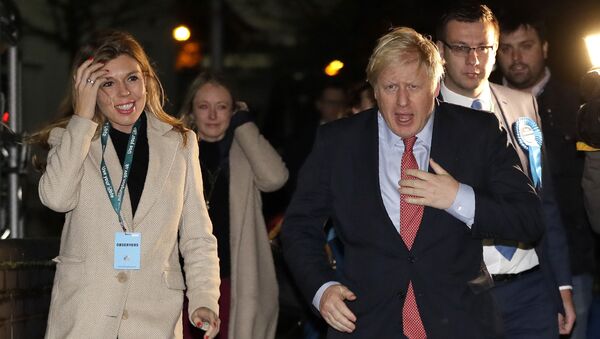 © AP Photo / Kirsty Wigglesworth
Subscribe
Criticism has been launched against the British Prime Minister over a 10-day holiday he took following the December 2019 general election, leading to an official inquiry over his claim that the trip was funded by businessman David Ross.

UK Prime Minister Boris Johnson is facing a probe by Parliament's sleaze watchdog over his £15,000 winter holiday to the Caribbean, the Observer reports.

The Parliamentary Commissioner for Standards, Kathryn Stone, launched the official inquiry into Mr Johnson last Wednesday, and has appealed for information from the prime minister and Tory donor and businessman David Ross.

The new probe follows Johnson's declaration in the register of MPs' interests that the funding for the "accommodation for a private holiday for my partner and me, value £15,000" came from Mr Ross.

A spokesman for Mr Ross initially denied that the Carphone Warehouse co-founder had financed the trip, but later clarified saying there was a "benefit in kind" to the PM and his partner Carrie Symonds during their vacation to the island of Mustique after the 2019 December general election.

"The Code of Conduct requires members to provide the name of the person or organisation that actually funded a donation", said Shadow Cabinet Office minister Jon Trickett said in a letter to the commissioner last month.

"The evidence now suggests it was not David Ross. The entry made by the Prime Minister therefore appears to be incorrect".

The results of the investigation into whether Mr Johnson has broken the MPs' code of conduct will be submitted to the Committee on Standards to review the evidence and potentially recommend a penalty.

The owner of the paradise island accommodation, Sarah Richardson, confirmed she and her husband Craig “got paid” for the 10-day stay last month but “no idea” of who covered the cost, as it was organised by the private island’s management company.

The trip was also saw the PM become the the subject of criticism election campaign not ending the festive holiday amid the heating of international tensions following the US assassination of Iranian general Qassem Soleimani on 3 January.

Three inquiries are currently pending regarding Johnson’s conduct, including his relationship with US businesswoman Jennifer Arcuri and his intervention, as London Mayor, to allow her to be present during trade mission trips.

000000
Popular comments
David Ross has been funding the Tory arty ever since he was a good friend of David Cameron when he was at 10 downing street, I have no doubt he funded Bojo's holidays, the question is Britain better than a corrupt Banana Republic, where the rich buy out politicians, and call it call it plainly. "Funding" ?