© Sputnik / Maksim Blinov
/
Go to the photo bank
Subscribe
MOSCOW (Sputnik) - The European Union has no reservations about the impartiality of the court, which will hear the 2014 Malaysia Airlines MH17 crash case on 9 March in The Hague, High Representative of the EU for Foreign Affairs and Security Policy Josep Borrell said on Saturday.

"The downing of Flight #MH17 was a tragedy. Vital that we establish truth & bring those responsible to justice. @CourtMH17 trial is an important milestone in this process & EU has full confidence in its procedures. All States must cooperate fully w/ ongoing @JITMH17 investigation", Borrell wrote on Twitter.

The news comes a day after the Office of the Russian Prosecutor General said that the Dutch-led Joint Investigation Team (JIT), which does not include Russia, had ignored the significant amount of information that Moscow provided to the Netherlands, showing "a biased approach to Russia and its attempts to make clear the true circumstances of the crash".

Almost immediately after the incident, the US and its European allies claimed, without presenting any evidence, that Russia had provided the Donetsk People’s Republic’s (DPR) militia with the weaponry that was used to down the aircraft. 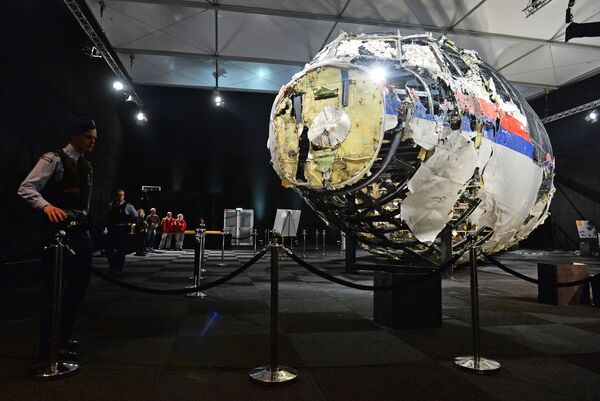 Pieces of the Boeing 777 Malaysia Airlines (flight MH17) , which crashed in 2014 on the territory of Ukraine
© Sputnik / Maxim Blinov
/
Go to the photo bank

The prime minister of Malaysia, which lost 43 people in the tragedy, also criticised the results of the investigation, which he called "politicised".

Russian President Vladimir Putin condemned the report for failing to address "a lot of questions" that remained unanswered, adding that the JIT did not plan to investigate the tragedy but to "appoint perpetrators" instead.

000000
Popular comments
I doubt the EU would say anything else.

Gregoire Trez
7 March 2020, 19:53 GMT3
000000
Borrell has just in that one insidious statement lost all credibility, he can no longer remain in his new role. He should resign immediately before he is laughed out of Brussels.